15 Art Exhibits You HAVE to See This Summer 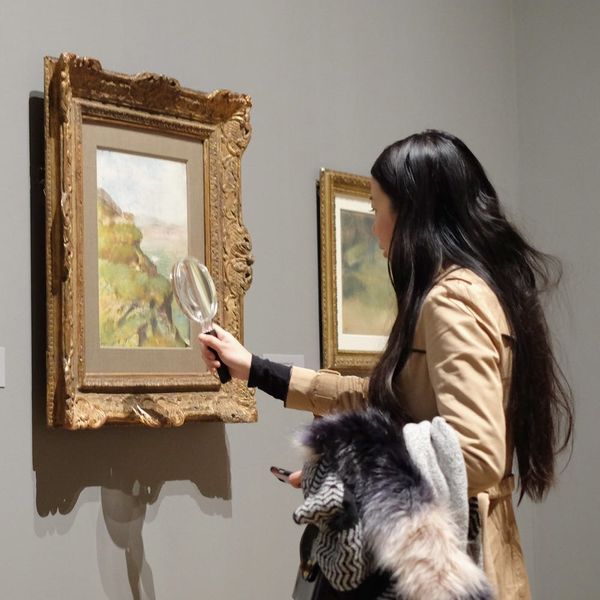 Sure, those seriously addictive books about twisted love are perfect for a summer beach vacation. That’s not to say there isn’t room for a bit of culture in your summer schedule or that serious art can’t be as entertaining as chick lit! Visiting a museum or gallery is also a great way to enjoy a city when you’re traveling solo. To showcase just how much some of the incredible museums in the US have to offer, we’ve put together a list of 15 must-see exhibitions happening this summer. Time for your next road trip.

1. Degas: A Strange New Beauty, MoMA, New York City (March 26 – July 4, 2016): This MoMA exhibit takes a step away from Degas’ ubiquitous dancer subject matter to focus on the painter’s fascination with printmaking. Introduced to the monotype in the mid-1870s, Degas took a quick liking to the innovative new medium and produced an array of dizzyingly captivating and radical prints. (Photo via Andrew Toth/Getty Images)

2. Cindy Sherman: The Imitation of Life, Broad Museum, Los Angeles (June 11 – October 2, 2016): This survey of Sherman’s work will be the first special exhibition the Broad will host, and if the new museum’s first few months are any indication, it’s sure to bring in major crowds. The show is slated to fill the museum’s first-floor galleries with more than 120 of Sherman’s works and will “foreground Cindy Sherman’s engagement with 20th century popular film and celebrity,” which couldn’t be a more perfect theme for Sherman’s first LA show in over 20 years.

3. Robert Mapplethorpe: The Perfect Medium, Getty Museum, Los Angeles (March 15 – July 31, 2016): Mapplethorpe embodies that ’70s bohemian artist lifestyle we’re all so quick to romanticize. And looking at his intimate, piercing photographs from that time, it’s hard not to! The Getty’s retrospective of Mapplethorpe’s work will include those stripped-bare early works through his politically charged shots from the ’90s.

4. #techstyle, Museum of Fine Arts, Boston (March 6 – July 10, 2016): We’re down with anything that has a hashtag in the title. And it’s about fashion? Even better. This forward-thinking exhibit from the Boston MFA is full of designer pieces from their permanent collection that have been made with 3D printers and digitally printed fabrics. The fashion world has wholeheartedly embraced the tech industry, and this show serves as a love letter between the two.

6. Kerry James Marshall: Mastery, Chicago Museum of Contemporary Art (April 23 – September 25): Kerry James Marshall, one of America’s greatest living artists, was born in Birmingham, Alabama before the Civil Rights Act was passed. His first-hand experience with African-American life in the US informs his thoughtful, powerful and imaginative paintings. (Photo via Tim Boyle/Getty Images)

7. Converging Lines: Eva Hesse and Sol LeWitt, Cleveland Museum of Art (April 3 – July 31):Converging Lines “celebrates the close friendship between two of the most significant American artists of the postwar era,” and explores the diverse, somewhat opposing ways in which Eva Hesse and Sol LeWitt approached their work. Many of the pieces exhibited haven’t been shown for decades, so it’s especially cool to get to see them in such an interesting context.

8. The Open Road: Photography and the American Road Trip, Detroit Institute of Arts (June 17 – September 11): What better reason do you need to take a road trip than to see a road trip themed art show? This traveling exhibition features 19 photographers who deftly capture the essence of the free-spirited, romanticized American road trip with their stunningly insightful photographs.

9. Women of Abstract Expressionism, Denver Art Museum (June 12 – September 25): Often overshadowed by their male counterparts, the women of abstract expressionism don’t get their fair due of recognition, but this comprehensive show at the Denver Art Museum is aiming to change that. Head to the Mile High City to see Elaine de Kooning, Lee Krasner and Helen Frankenthaler’s wonderfully evocative abstract masterpieces in person.

10. The Rise of Sneaker Culture, High Museum Atlanta (July 11 – August 14, 2016): Sneakerheads, rejoice! Get up close and personal with 155 of the most iconic sneaker designs, including collabs with Damien Hirst and Kanye West. The show, which originated at the Bata Shoe Museum, explores the complex role sneakers play in “urban culture and masculine identity.” Style and substance in a sweet sneaker package!

12. Matisse in His Time: Masterworks of Modernism from the Centre Pompidou, Oklahoma City Museum of Art (June 18 – September 18, 2016): Not only do you get to see a full retrospective of Matisse’s career in the 50 paintings on view at this Oklahoma City Museum of Art exhibition, you also get another 50 works from some of Matisse’s most prolific and beloved contemporaries like Picasso and Renoir. If you live in North America, it’s worth the trek to OK City as it’s the only place this exhibit from Paris will be stopping on the continent.

13. Defining Moments: 50 Years of Fashion, Phoenix Art Museum (April 2 – August 7, 2016): With Alexander McQueen, Yves Saint Laurent, Balenciaga and Chanel on the list, you know this is the kind of fashion event you’re gonna want to attend. This Phoenix Art Museum exhibition features 50 designer pieces curated from the museum’s own permanent collection, with in-depth analysis of each piece and the history of how it ended up at the museum. Get primed on your fashion history in advance of Fashion Week!

14. High Society: the Portraits of Franz X. Winterhalter, Museum of Fine Arts, Houston (April 17 – August 14, 2016): Did you know that Winterhalter was the most sought after 19th century portrait artist by the European aristocracy? It’s true! The Houston Museum of Fine Arts will be displaying some of his most well-known portraits alongside complementary pieces of clothing from Charles Frederick Worth, Winterhalter’s contemporary, for a comprehensive look at high society.

15. Beyond the Selfie: Portraits in the 21st Century, Minneapolis Institute of Art (May 14 – October 30, 2016): MiA is taking it old school this summer with an exhibition highlighting some of the 21st century’s best, most expressive self-portraits created sans front-facing phone camera. The museum promises “works that are striking for their slowed down, careful, existential examination of the self”.

Are there any exhibitions you’re looking forward to seeing this summer that aren’t on our list? Tweet us @BritandCo and tell us which ones you’re dying to visit!