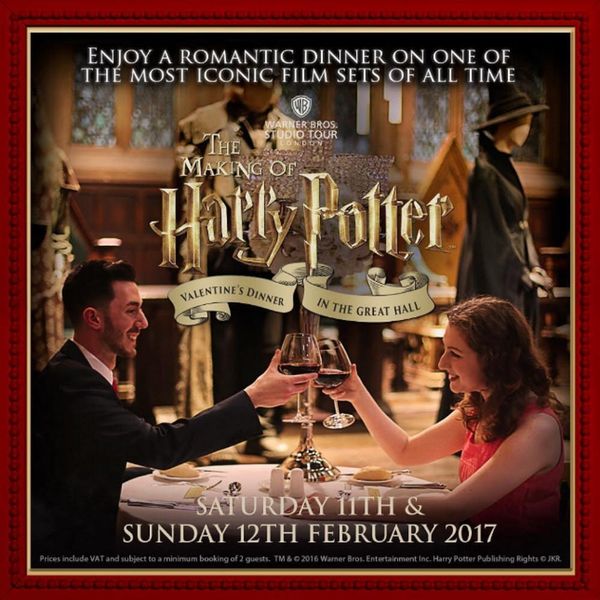 Last year, we were blown away by the fact that Warner Brother’s studio in London was offering a romantic Valentine’s dinner in the Great Hall at Hogwarts. Tickets sold out fast for the event, which would have been super fun since it included a tour of the set, a three-course meal and a nightcap overlooking a model of the school. If we’ve learned anything from Harry Potter, it’s been about love, and this event seems so magically romantic, we can hardly stand it.

According to the studio’s website, this year’s event seems to be pretty much on par with last year’s. The main difference is, however, that because of such high demand for these very exclusive (and pricey!) tickets, the company has offered a lottery-based system. All the way back in December, they closed the lottery and offered people the chance to win a coveted place in line to purchase these ticket pairs (they cost £495 per pair, or $602 USD). While tickets are probably sold out, we can pretty much guarantee that someone’s trying to sell them on eBay or another auction site.

The idea of having a romantic dinner at Hogwarts is so adorable, and since it’s pretty unlikely we’ll be able to attend this year’s event, we’ll definitely consider throwing a bit of Harry and Ginny goodness into our V-day celebrations.

What will you be doing this year for Valentine’s day? Tell us @BritandCo!

Kat Armstrong
Kat has been a writer, social media maven and mom for longer than she's willing to admit. She's also spent time in front of and behind the camera, interviewing celebs, politicians and acting as a producer for fashion and artistic photography shoots. When she isn't writing for various orgs and publications, she's hanging with her kids, husband and French Bulldog, Peter, in Toronto, Canada.
Valentines Day
Pop Culture
Valentines Day