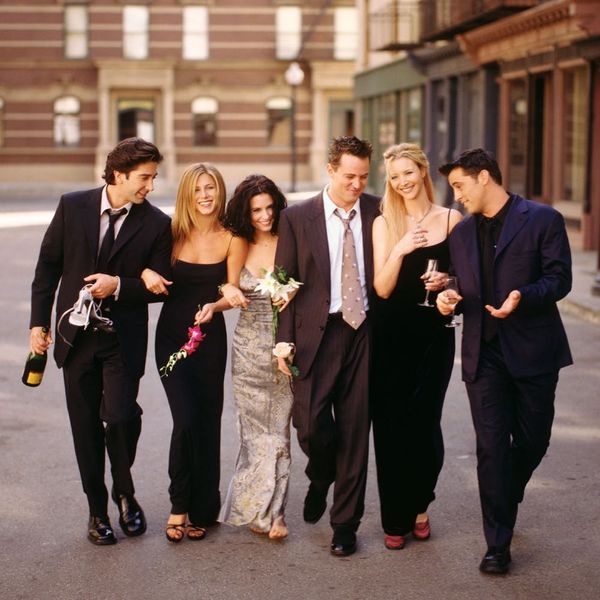 A fake Friends reunion movie trailer made its way online last week and almost immediately racked up millions of views, showing just how big the appetite is for a reboot of the hit ’90s series. While that’s not likely to happen, we at least have some hilarious new future-Friends scenarios to think about from Twitter, and they’re actually so spot-on.

The meme started when Netflix’s Twitter account posted a list of ideas for Friends 2018 plot lines. They included Chandler going on about how funny his own Vines were (RIP), an Ed Sheeran cameo during one of Phoebe’s Central Perk performances, Ross getting everyone into Bitcoin, and Joey eating Tide pods, a reference to the (ILL-ADVISED) ongoing meme where people, well, eat Tide laundry detergent pods. (That last one included an Ellen Pompeo/Dr. Meredith Grey cameo when Joey inevitably goes to the hospital, natch.)

One suggested episode title was “The One Where the Gang Realizes Their Privilege,” which acknowledges renewed debate over the characters’ comfortable, sheltered lives.

FRIENDS 2018 PLOTLINES
-Joey eats Tide pods, goes to hospital (guest star Ellen Pompeo)
-Chandler won't shut up about how funny his Vines were
-Ed Sheeran cameo interrupts Phoebe's Central Perk set
-Ross gets everyone into Bitcoin
-The One Where The Gang Realizes Their Privilege

The tweet was seemingly spurred by a recent online article that suggested everyone re-binge watch Friends on the streaming service. Immediately, fans of the show (and probably of Netflix’s notoriously cheeky Twitter account) started making their own suggestions for modern-day episodes of the NBC classic.

1. Let’s get digital. One user envisioned Phoebe showing up too early for the Women’s March, and Ross and Joey venturing into various digital platforms.

2. And more inclusive, too! One user pointed out the oft-leveled criticism of the show’s lack of representation — and Netflix suggested making Gabrielle Union, who made a cameo on the show, a regular.

4. Social media stars all around! Monica could take her foodie skills to Instagram for SURE.

Monica goes on Hell's Kitchen and becomes famous for making Gordan Ramsey scared of her.

6. Could Ross BE any more annoying?! This would so happen.

7. A classic plot — with a twist. The phalange is still broken, but in 2018, screaming about it on a plane has way worse consequences.

Rachel tries to get off the plane by screaming about broken phalange; is added to No-Fly list

8. Things get political. Some users made reference to other, more serious issues in today’s society.

People loved the meme so much that they even requested a similar tweet for The Office.

If NBC ever does decide to reboot Friends, Twitter might be a good place to start for ideas.

Do you have a modern-day Friends idea? Let us know @BritandCo.

14 Page Turners for the Book Lovers on Your List