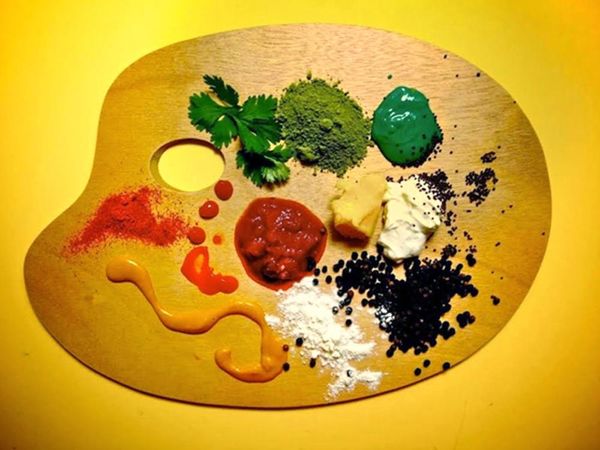 Have you ever eaten a grilled burger while warming yourself next to a roaring campfire, or had a glass of wine while enjoying a cool breeze? It’s a taste you’ll always remember and nothing can compare, amiright? It turns out that not all you are tasting is in your tastebuds.

1. Fat Duck: Spence has worked with experimental chef Heston Blumenthal on how sound can change flavor perception, and the two have come up with a new dish for his three-Michelin-starred restaurant, Fat Duck. Upon ordering “The Sound of the Sea,” diners are brought an iPod shuffle playing actual sounds of the sea, and a few minutes later, the seafood dish is brought out. The seashore sounds in your ears actually enhance the flavor of the seafood. (via Pocket Fork)

2. Diageo: Whisky drinkers, listen up: London-based alcoholic beverage company Diageo is opening a whole new window of creativity in the food industry. Diageo has discovered that changing a room’s atmosphere can alter the taste of their single-malt whisky. They found that a room bathed in tones of green, soaked in sounds of spring and decorated with fresh grass actually makes the whisky taste grassier. (via BBC News)

3. ElBulli: Spence also worked with the infamous Ferran Adrià of elBulli, who performed a sensory experiment with plate color and shape. Adrià plated a strawberry mousse dessert on white and black plates, which he served to his diners. Those who ate their dessert from a white plate found that it tasted 10% sweeter than those who ate the same dessert from a black plate. Lesson learned: If the dessert you made for your dinner guests is too sweet, serve it on a black, square plate. (via Baum Whiteman, photo via Matthew Lloyd/Getty)

4. House of Wolf: At the House of Wolf, a pop-up restaurant in London, customers were given identical desserts and were invited to use their mobile phones to ring one of two numbers that played either a high-pitched flute and piano music or instruments with deeper tones. The higher notes evoked sweetness, while the lower tones elicited bitterness. (via BBC News)

5. Nestlé: Even Nestlé has been experimenting with neurogastronomy. Their research in “mouth geometry” has concluded that round pieces of chocolate melt better than square pieces. Round pieces also emit a different flavor profile, since round shapes fit the shape of people’s tongues better than square ones. (via Nestle)

6. The Colour Palate: This one is really speaking our language. A London popup from The Art of Dining called The Colour Palate, was a dining experience where the food, drink, room, music, table, cutlery and mood changed color with each course. Our mouths and eyes are watering. (Photo via WGSN)

Have you tried multi-sensory eating? Let us know in the comments below!

Michelle Swift
Michelle Swift is a freelance writer and blogs on michelleswift.com. She has an affinity for running, culinary eats, travel and sparkly gold things. People and adventure light her up like a hot pink neon sign!
Starbucks
Recipes
Starbucks
The Conversation