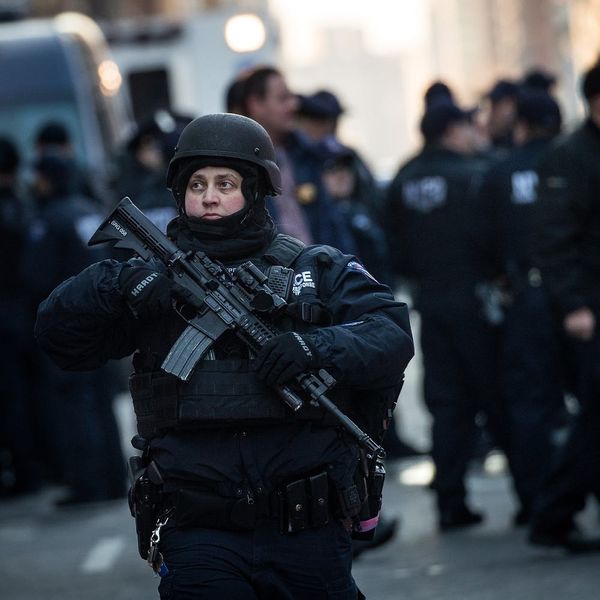 A man is in custody after detonating a homemade explosive device in a Manhattan subway station during rush hour Monday morning.

The blast occurred shortly before 7:30 AM.in a passage between Times Square and the Port Authority Bus Terminal, reports the New York Times. The suspect, since identified as 27-year-old Bangladeshi native Akeyed Ullah, detonated the device, injuring himself and three commuters. Authorities are calling Ullah’s attempt a terrorist attack and it is believed he acted alone.

Surveillance video shows the moment the bomb went off:

The New York Daily News reports that he then attempted to set off the rest of his bomb, but was apprehended by two PAPD officers who stripped him his homemade device before he could do so.

Ullah was taken to Bellevue Hospital to be treated for burns and cuts to his hands and abdomen but is expected to survive. Injuries to the three commuters are thought to be minor.

Police told the Times they believe the bomb went off early. Witnesses say they heard an explosion and then saw smoke and people fleeing the site of the blast.

The explosion prompted widespread disruption in one of the world’s largest urban transit systems, and at peak commuting time. 10 subway lines and seven trains were rerouted to skip the 42nd street stop, one of the city’s main hubs.

This is the first attempted terrorist attack in New York City since October 31, when a man drove a rental truck down a busy Manhattan sidewalk, killing eight people.

Was your commute affected? Tell us @britandco!