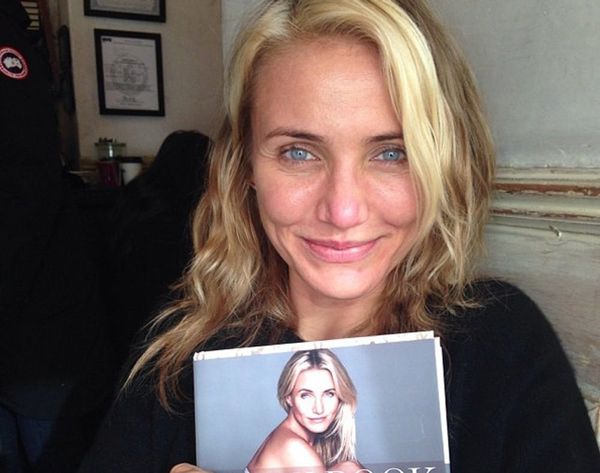 There’s a reason why the Oxford English Dictionary declared selfie the word of the year in 2013. The self-portrait tactic is taking over the world…. well, at least the Instagram world. The selfie epidemic has spread so much that even celebrities, who have a reputation for wearing too much makeup, are posting selfies on the reg — even their best, most candid all-natural looks. Check out these makeup-free star selfies, which prove what we’ve known all along: less is more. (And if you’re looking to go the #NoMakeup route but want a minimal amount of coverage, visit our list of must-have makeup products for the look.)

1. Beyonce: All hail Queen Bey. That’s all we got. (via beyonce)

2. Heidi Klum: The “Project Runway” host wakes up looking like she spent hours in the makeup chair. “Good morning,” she captioned this selfie. (via heidiklum)

3. Gwyneth Paltrow: The actress posted this sweet selfie of her hugging son Moses on his eighth birthday. (via gwynethpaltrow)

5. Kim Kardashian: Thanks to jetlag, a wide-awake Mrs. West posted one of her famous selfies at 4:36 am. (via kimkardashian)

6. Jennifer Lopez: It’s almost not fair how stunning Jenny From the Block is without makeup. (via jlo)

7. Jennifer Aniston: Hairdresser Chris McMillan may have made “The Rachel” the most famous ‘do of the ’90s, but in 2013, he was praised for posting a makeup-free selfie with Aniston. (via mrchrismcmillian)

9. Lady Gaga: Born this way, indeed! Mother Monster stripped herself of her over-the-top clothes and makeup to show her true beauty. (via ladygaga)

10. Drew Barrymore: Despite having her own cosmetic line, Flower Beauty, Drew Barrymore went sans makeup while sipping an adult beverage… with a daisy in it, of course. (via drewbarrymore)

14. Lena Dunham: Whether being nude on Girls or going makeup-free while eating a slice, the actress has no shame. We dig it. (via lenadunham)

15. Cara Delevingne: The model has said that Instagram is one of her favorite apps. Duh — she’s a selfie queen. (via caradelevigne)

16. Madonna: She should have captioned this photo, “Haters gonna hate.” (via madonna)

17. Hilary Duff: “I woke up like this,” the star titled this photo. Lucky. (via hilaryduff)

18. Rosie Huntington-Whiteley: The British beauty posed in bed for this self portrait that got more than 64,000 likes. (via rosiehw)

19. Lupita Nyong’o: This photo is just one more reason why the Oscar winner was the cover star of People’s “50 Most Beautiful” issue. (via lupitanyongo)

Do you like taking selfies? Are you afraid of going makeup free on Instagram? Do you think celebrities look better with or without makeup? Annnnd sound off!

Kim Messina
Kim was born and raised in New Jersey. The true definition of a “fan girl,” her friends make fun of her because she speaks in teen. But she’s okay with that because boy bands are her Kryptonite. On a typical night you can find her reciting lines to a Full House rerun and testing her latest baking experiment.
Beyonce
Makeup
Beyonce Gwyneth Paltrow Kardashians lena dunham Lupita Nyong'o
More From Makeup