Oprah Hit the Georgia Governor’s Race at the Perfect Time 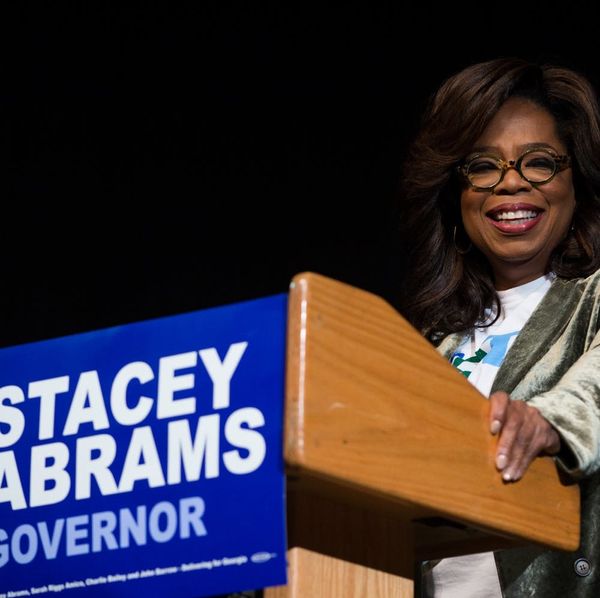 In perhaps the most high-profile collaboration of this election cycle, Oprah Winfrey hit the campaign trail this week to stump for Democratic Georgia gubernatorial candidate Stacey Abrams. If elected, Abrams would be the first Black woman state governor in US history. On Thursday, Winfrey visited Georgia and endorsed Abrams in a passionate speech, in which she also emphasized the critical importance of voting. Winfrey quoted Maya Angelou, citing how the poet “used to say, ‘Baby, your crown has been paid for so put it on your head and wear it.’”

“The right to vote is your crown,” Winfrey said.

After delivering her remarks, Winfrey wasted no time getting on the ground and knocking doors for Abrams in her first time canvassing for a political candidate.

Certainly, Oprah’s star power has helped draw the eyes of the nation to the race between Abrams and Trump-endorsed Republican nominee Brian Kemp, who currently serves as Georgia’s secretary of state. But Georgia’s highly competitive governor’s race has been receiving mounting national attention for weeks now, in light of a series of controversies involving allegations of voter suppression and racism.

Last week, Georgia native and former President Jimmy Carter wrote an open letter to Kemp, publicly calling on the Republican nominee to resign from his post as Secretary of State following several concerning reports about Kemp’s use of voter suppression tactics to influence the election. The letter pointed out the inherent conflict of interest in Kemp determining the voting laws that would govern an election he’s on the ballot for, and the apparent racial discrimination driving these efforts.

“In Georgia’s upcoming gubernatorial election, popular confidence is threatened not only by the undeniable racial discrimination of the past and the serious questions that the federal courts have raised about the security of Georgia’s voting machines, but also because you are now overseeing the election in which you are a candidate,” Carter wrote.

As a result of policies Secretary Kemp has seen to, tens of thousands of majority-Black potential Georgia voters have seen their applications placed on hold. And considering that voters of color tend to disproportionately cast their ballots for Democrats, many have argued that Kemp’s actions reflect deliberate racial discrimination.

The 53,000 majority-Black voter registrations held by Kemp’s office are the result of a policy requiring application signatures to satisfy an “exact match” process that compares registration information to Social Security and state driver records. Following this policy, if the information does not exactly match, which often happens due to inconsistencies like misspelled names or missing hyphens — an application is held for additional screening and the applicant is notified and given a period to correct their information.

Within days of reports about the policy, a coalition of civil rights groups filed a lawsuit against Kemp, but since then, more alarming incidents and revelations have arisen. According to one report, Kemp’s office purged an estimated 1.5 million registered voters between the 2012 and 2016 elections, while 670,000 voters were purged last year alone. Among these 670,000 purged voters, 107,000 lost their ability to vote due to a “use it or lose it” policy that removes voters for not voting in recent elections.

In August, an effort to close polling places in Black-majority counties in the state was ultimately nixed. Though the outcome wound up being positive, the effort reflects a broader trend. In one particularly alarming incident, 40 Black senior citizens were taken off a bus en route to a polling place for early voting.

Voter suppression has long been a point of contention in the southern state, as in many states under Republican leadership. But the historic nature of Abrams’ race, due to her identity as a Black woman who has long been involved in the civil rights movement, has brought the issue of voter suppression tactics, and their racial implications, to the forefront.

Trump on Thursday claimed that Abrams, who has served as Georgia House Minority Leader and holds the Ivy League degrees that Trump celebrates in white men, is “not qualified” to be Georgia’s governor. His remarks have further drawn attention to the role of race in this election, due to Trump’s long history of questioning Black people’s intelligence.

Of course, the race between Abrams and Kemp is significant in other ways. Kemp is the embodiment of Trumpism, rising to fame with a notorious ad that featured him appearing to threaten a teenage boy while carrying a gun. He praised the 15-week abortion ban passed by Mississippi earlier this year, and promised to be a “pro-life” governor.

Abrams’ platform and record as a public servant reflect a unifying force within a Democratic party that’s become increasingly splintered by conflict between progressives and traditional Democrats. Her outspoken advocacy for the disparate experiences of marginalized groups is a sharp rebuke to Trump-era criticisms of “identity politics.”

Abrams’ race against Kemp is one of the closest in the country right now. Polling throughout October has shown Kemp leading by one point, Kemp and Abrams tied, and, as of a few days ago, Abrams leading by one point. In this race, every single vote matters.