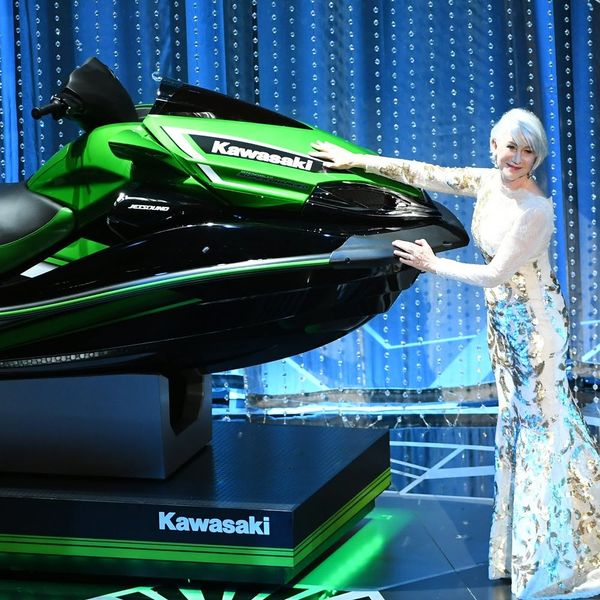 Let the games begin! In order to keep the 2018 Academy Awards at Los Angeles’ historic Dolby Theatre moving along this year, host Jimmy Kimmel offered a bribe of sorts to motivate the award winners to keep their speeches as short as possible. The person with the shortest speech will win a jet ski, which was modeled a la The Price Is Right by Helen Mirren. (Kimmel made sure to note, though, that Mirren is not included with the jet ski.)

“If you do get an Oscar tonight, we want you to give a speech and we want you to say whatever you feel needs to be said. Speak from the heart. We want passion. You have an opportunity and a platform to remind millions of people about important things like equal rights and equal treatment. If you want to encourage others to join the amazing students at Parkland at their march on the 24th, do that. If you want to thank a favorite teacher, do that. Or maybe you just want to thank your parents and tell your kids to go to sleep. What you say is entirely up to you,” Kimmel told the crowd.

“But with that said, this is a really long show,” he continued. “So here’s what we’re going to do. Not saying you shouldn’t give a long speech, but whoever gives the shortest speech tonight will go home with — Johnny, tell ’em what they’ll win!”

He then unveiled a black and neon-green Kawasaki jet ski. “Why waste precious time thanking your mom when you could be taking her for the ride of her life on a brand-new jet ski?” he quipped, before assuring the crowd that it was not a joke and that they would be timed.

The late-night host also said that winners wouldn’t be played off with music this year, but that those whose speeches go on too long would receive another cue to chase them off stage. “If your speech runs over,” Kimmel deadpanned, “instead of music, you’ll see and hear this.” And with that, Lakeith Stanfield, one of the stars of Get Out, ran onstage, yelling, “GET OUT, GET OUT!”

This year, anybody with a long speech won't get played off by music. Instead, this will happen…https://t.co/KGJMUsJlgf #Oscars pic.twitter.com/o4Wp6nEpqT

So, who’s taking home the jet ski? So far the time to beat is 36 seconds, courtesy of Phantom Thread costume designer Mark Bridges. Stay tuned to see if anyone can top that!

Kat Armstrong
Kat has been a writer, social media maven and mom for longer than she's willing to admit. She's also spent time in front of and behind the camera, interviewing celebs, politicians and acting as a producer for fashion and artistic photography shoots. When she isn't writing for various orgs and publications, she's hanging with her kids, husband and French Bulldog, Peter, in Toronto, Canada.
Awards Shows
Pop Culture
Awards Shows Oscars