13 Patriotic 4th of July Nails to Rock All Weekend 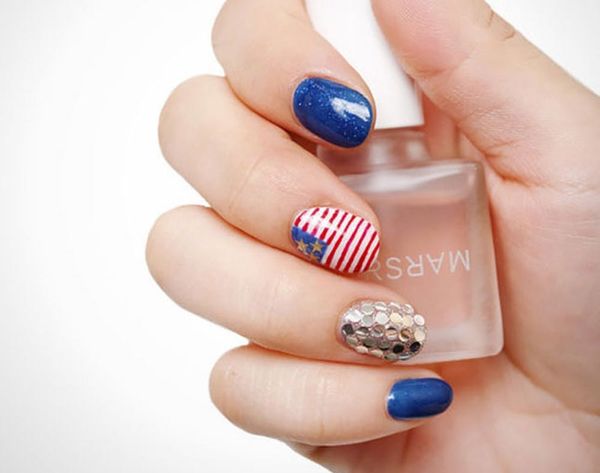 Ah, the Fourth of July. The one holiday where it’s perfectly acceptable to don head-to-toe red, white and blue, no explanation necessary. Naturally, if you’re going to embrace our country’s colors, then you might as well go full force. To accompany your undeniably festive attire for the day, we rounded up 13 patriotic nail designs (in honor of the original 13 colonies, of course) that encapsulate everything that we love about the Fourth: stars, stripes, glitter and fireworks.

1. The Tie-Dye Effect: Tie-dye-and-floral-mix nails are seriously so rad. While the idea of actually attempting this DIY is pretty intimidating to amateur nail artists, everyone can admire them from afar. (via Chalkboard Nails)

2. Nautical Nails: A preppy take on your traditional July 4th mani that will complement your chambray shirt and white chinos just perfectly. The stars have been swapped out for anchors, and we’re not complaining one bit! (via Daily Something)

3. Stepping into The Wild: If Katy Perry were to paint her nails for the Fourth, then we imagine they’d look a little something like this. The combination of animal print and glitter makes us want to r-o-a-r along with the fireworks. (via Glitter and Gloss)

4. Starry Manicure: Proof that sometimes less really is more, this starry manicure shouldn’t be overlooked. While it may not scream Independence Day, that’s okay, because your flag print dress will do the job for you anyway! (via Lauren Conrad)

5. Sparkle and Go!: Now, this is our kind of mani! Start with a white base and then add a coat of red and blue speckled polish on top! (via Fab Fatale)

6. Splattered Nails: Channel your inner Jackson Pollock this Fourth and splatter away! The great thing about this mani is that you can’t mess up — in fact, the more painterly, the better (via Spellbound Nails)

7. Patriotic Patchwork Nail Art: Who knew that your #manioftheweek could be inspired by your great-grandmother’s quilt? (via Lacq Lustre)

8. Red, Blue and Glitter Nails: Feeling intimidated so far? Don’t be! This is the land of the brave and this is an easy-to-do manicure. Simply brush glitter on the tips. (via The Daily Varnish)

9. Sparkly July 4th Mani: We’re always trying to up our game when it comes to our accent nail design. These ultra-sparkly rhinestones are a game changer. (via Bella Sugar)

10. Crosshatch Nails: If traditional horizontal stripes aren’t your style, then don’t be afraid to create a visually interesting crosshatch design. (via I Am Definitely Addicted)

11. Home Run Mani: Nothing says the Fourth of July like an All-American baseball game, some hot dogs and a patriotic mani! The navy and gold glitter combined with a white accent nail (and red stitching!) is seriously too cute! (via The Polish Boutique)

12. Patriotic Polka Dots: When stripes grow stale, don’t hesitate to pull out the polka dots. (via The Daily Varnish)

13. Abstract Nails: Oh hai, minimalists. Don’t fret. We haven’t forgotten about you! This no-nonsense manicure designed by nail artist Jin Soon Choi is refreshingly simple and can be created by using a thin brush. (via All Lacquered Up)

Which savvy and oh-so-patriotic nail design will you be rocking on the Fourth?