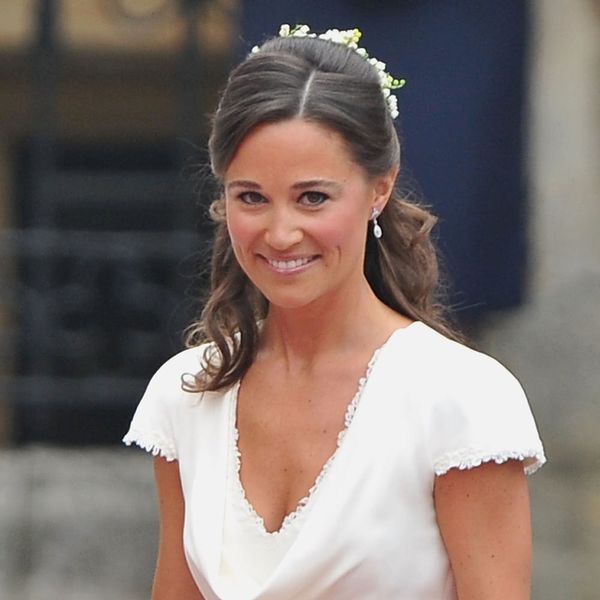 Another Middleton sister is getting married! That’s right, Kate’s little sister and bestie, Pippa Middleton, is engaged. Saying “yes” to James Matthews, Pippa is going from the most famous bridesmaid of our time to the bride herself (which means we may get to see Kate as a bridesmaid!). And to put any rumors to rest, Pippa is showing off her engagement ring, and it’s all kinds of art deco gorgeousness.

“Miss Pippa Middleton and Mr. James Matthews are delighted to announce they became engaged on Sunday, July 17 and plan to marry next year,” said a statement officially announcing the news, with Pippa herself adding that she “couldn’t be happier,” according to People.

After taking a break and recently splitting up, 32-year-old columnist Pippa and hedge fund manager James are not only back together in a big way, but their engagement has apparently totally taken friends and family by surprise. With James reportedly getting down on one knee in a traditional proposal this past weekend in the Lake District of northwest England, there was no doubt that Pippa had accepted when she was spotted outside of her London home this morning wearing a ring that’s worthy of a Duchess’ sis.

Want a closer look? Of course you do! Here you go…

There are no deets yet regarding the designer (or price tag), but it’s strikingly similar to the Asscher Cut Diamond Cluster Ring in the Art Deco Style (£2,450 / $3,220) from The London Victoria Ring Company. A beautifully classic setting that is anything but understated, it’s as lovely as Pippa herself.

Congratulations to the loving pair!

Are you excited to see Pippa’s wedding? Do you think Kate will be her bridesmaid? Tweet us @BritandCo!

Desiree O
Desirée O is a ‘Professional Bohemian’ who loves anything and everything related to the arts, entertainment, and pop culture. She ADORES being a ‘Newsy’ for Brit + Co, covering all of the latest tidbits of awesomeness that you want to read about. When she’s not writing, she’s either making messy art, going on long adventurous walks with her camera, or poking around over at bohemianizm (http://www.bohemianizm.com/). You can find out about Desirée O and her work at http://DesireeO.com/ or follow her on Twitter @DesireeO.
Engagement Rings
Celebrity News
Engagement Rings Royal Family
More From Celebrity News