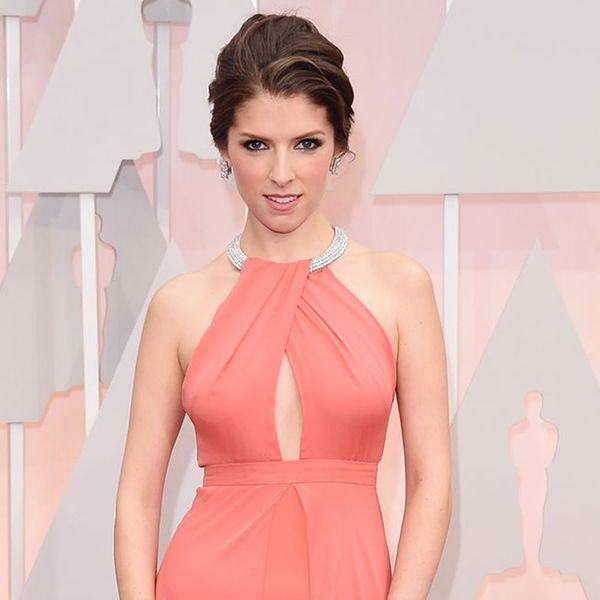 May marks the month that the Bellas are back. So to celebrate the dance-offs, the sing alongs and the LOLs that are sure to fill Pitch Perfect 2 when it hits screens May 15, we’re rounding up the badass a cappella group’s best looks — off-stage, that is. From Rebel and Anna to Brittnay + Eliz, scroll through to check out our favorite red carpet moments from the talented babes who are about to give us even more reasons to sing in the shower, plus shop similar styles for all the times you need to look aca-awesome this spring.

1. Rebel Wilson’s Cape Dress: One glance at Rebel’s next-level LBD at the 2015 MTV Movie Awards will leave you thinking that no dress is complete without a cape. Add a pop of color to this Adrianna Papell Cape Sheath Dress ($180) with a pair of bold-hued heels. (Photo via Alberto E. Rodriguez/Getty)

2. Anna Kendrick’s Quirky Print: When we close our eyes and think of Anna Kendrick, we envision her in full-on princess attire (whether that’s because of her role in Into the Woods or her ethereal peach dress at this year’s Oscars, we don’t know). So it was awesome to see her rocking a cool-girl skirt and quirky printed top at her NYLON Cover Party this past January. Balance these Kaiaka Pineapple Printed Shorts ($34) with a black top for that same sophisticated spin. (Photo via Rachel Murray/Getty)

3. Elizabeth Banks’ Girly Embellishments: Elizabeth is one of our favorite red carpet risk-takers, and at the 2014 Vanity Fair Oscar Party, she didn’t disappoint. Her monochrome outfit dazzled with girly embellishments, from gems to sequins to feathers, that felt so glamorously girly it hurt. This Chi Chi London Bandeau Full Midi Prom Dress ($127) delivers the same flirty punch with multi-hued embroidered blooms. (Photo via Pascal Le Segretain/Getty)

4. Brittany Snow’s Bold Florals: Stand out this spring in a floral print that’s bright and bold, like Brittany’s glam twosie from the 2014 TrevorLIVE LA Event. This Nasty Gal Bloom and Board Pleated Skirt ($98) has that same not-so-girly vibe the mondo print affords. (Photo via Jason Merritt/Getty)

5. Hailee Steinfeld’s Next-Level Stripes: Hailee was a vision in head to toe Dior Couture at the 2015 iHeartRadio Music Awards. While her acrylic-heeled boots gave us major shoe envy and that clear overlay made us consider a new way to layer tanks, her striped pleated skirt flat-out stunned. Forget all about French girl stripes with lines that pop with color (and sparkle, too!) like this Nasty Gal Fair Game Sequin Dress ($88). (Photo via Jason Merritt/Getty)

6. Ester Dean’s Chic Suiting: At the 2013 MTV Movie Awards, Ester showed how to add a cool girl touch to menswear-inspired pieces. Take her cue and look for a next-level blazer with a satin sheen finish like her own, or chic, unexpected details like the cropped zipper hem on this Topshop Zip Off Blazer ($115). (Photo via Alberto E. Rodriguez/Getty)

7. Kelley Jakle’s Pretty Yellow: Kelley proves that when you’re wearing a color as gorg as this — her buttery yellow 2013 MTV Movie Awards dress — you don’t need too much else to turn heads. Keep it similarly simple in this Forever 21 Crisscross Back Mini Dress ($23) and round out the look with light pastel accessories like a clutch or statement necklace. (Photo via Jason Merritt/Getty)

9. Chrissie Fit’s Effortless Jumpsuit: Chrissie nailed the trick to making a jumpsuit look completely effortless at the 2014 Latina Magazine’s 30 Under 30 Party. Basically, it all comes down to her silhouette — a halter top, wide-legged onesie that drapes in all the right places. Channel her easygoing grace in this similar Mango Halter Neck Jumpsuit ($120). (Photo via Jonathan Leibson/Getty)

10. Anna Camp’s Sophisticated Geometry: Sometimes a print with too many angles can turn an entire look muddy. Not so for Anna’s gorgeously geometric 2015 MTV Movie Awards dress. Pass up the tribal-feeling patterns for more abstract shapes, like the angular (and totally figure flattering) color block on this Vesper Square Origami Pencil Dress ($101). (Photo via Alberto E. Rodriguez/Getty)

11. Alexis Knapp’s Not-So-Basic Black Dress: Alexis proved that all-black dresses are anything but boring at Audi’s 2014 Golden Globes Weekend Celebration. Look for unexpected details that add drama when you’re picking a dark colored dress, like the slash cutouts and thigh-high slit on this Frame and Partners Stars Dance Maxi Dress ($217).

Which Bella’s — err, cast member’s — look do you want to copy? Tell us in the comments below.