Lessons I Learned on My Path to Becoming a Plant Lady 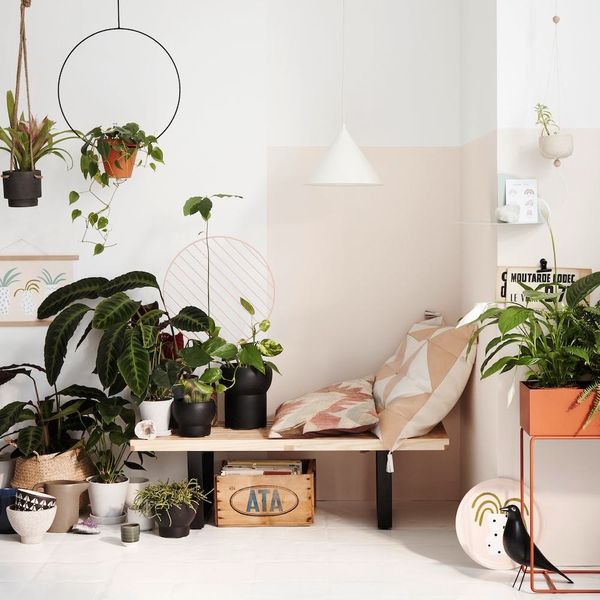 I live in New York City, where green space comes at a hefty premium, and, being a city girl through and through, living in my hovel of brick, concrete, and plaster never bothered me much — that is, until the houseplant trend hit. Scrolling through Pinterest and magazines, I found myself deeply envious of other folks’ jungalows, because, yes, the grass was actually greener on the other side. Unfortunately for me, I had whatever the opposite of a green thumb might be. When the succulent trend hit its peak, I probably killed three or so of my own. (Turns out, succulents are a much harder plant to sustain than their reputation lets on — more on that later.)

But I was hell-bent on earning the right to wear one of those “Crazy Plant Lady” shirts, so I turned to the experts: specifically UrbanStems Plants and Gifts Category Manager Tugce Menguc. The first thing Menguc told me was that I was owning the wrong kinds of plants. My one-bedroom in midtown faces north and gets barely any light, except through one sad little window, which is why all my succulents were dying (though the three on the sill are still hanging in there).

“I hear it a lot because of the [succulent] craze. People often come to me and say, ‘I got this succulent and it’s not doing too great. What can I do?'” Menguc tells me. “Succulents actually need a lot of sunlight and a low amount of water. They’re a desert plant, which is actually kind of a misnomer, because people are like, ‘They’re easy plants. No big deal!’ But we found succulents don’t do that well in any kind of indoor condition unless you have indirect access to sunlight.” Yikes, well that explains a lot. So what would thrive in my dark, cave-like space?

Menguc suggested that I look into some hardier varieties, like the snake plant or the pothos plant. The reason these darker green, leafy species do better in low-light conditions than their paler green brethren is that they’re extremely efficient at photosynthesizing sunlight. Another bonus of these photosynthesizing machines is that you don’t need to water them much. “When you have low light conditions, it also means you have to water your plant less, because they’re photosynthesizing less, and therefore do not need as much water pulled up from their roots to grow and generate new leaves,” Meguc explains. “Dark leafy plants actually require little attention — and actually do better with a little bit of neglect.”

As someone who travels a lot, I also wondered about care when I’m gone. Menguc gave some options on how to keep my leafy friends watered. One way to was to invest in a watering globe that you plug into the soil: When your plant is thirsty, it will draw from the reserve of water in the bulb. Another DIYable method is to cut a piece of string and place one end in the dirt and the other in a cup of water. It works the same way as the watering globe, and your plants will stay watered when you’re out of town. The third method, though, is to hit up a pal. “For vacation, this could actually be a great time to give your plant a little more light, if you have a friend who happens to live someplace with more sun who wouldn’t mind plant-sitting,” says Menguc with a laugh.

So my first acquisition was a snake plant, which I ordered from Amazon. Then, UrbanStems sent me their gorgeous juniper plant, The Lincoln, and I was on my way to houseplant heaven. One of the key things I learned from Menguc in terms of watering my new windowsill garden is that it’s actually better to under-water than overwater. “Most plants actually die because their roots are molding or are getting flooded with water,” she shares. “The rule of thumb is to let your plant completely dry out before you water it again.” She does also have a pro tip on how she likes to keep her plant babies hydrated, though this is definitely an extra step: “My favorite way to water is actually to take the plant out of the pot, putting it in [the] sink and letting the water dribble through, like if you kept it in the grower’s pot. Let it sit and absorb as much water as it can, and then put it back into the pot that you’re keeping it in.”

And so far, it’s been going swimmingly. (Except for my plant roots. They’re definitely not swimming in anything, because they’re finally getting properly watered.) I’ve learned to be equal parts patient and attentive. I do as Menguc suggests, feeling the soil every few days to see how dry it is, and I’ve cut down the watering to just once every two weeks or so. I turn my plants regularly so that each side gets its share of sunlight through my one little window. And sometimes I talk to my plants (though when I do, my dog looks at me like I’m crazy). I’ve also developed a new addiction to cute planters and am looking to expand my crop.

I have to say, it brings me a lot of joy to wake up and see some greenery in front of my window. There’s not only a sense that I’m properly #adulting here, but also, I get a connection to the outside that was previously missing. It’s a connection I hadn’t realized I needed until it arrived, but boy, am I glad it’s here. Time to order that shirt.

Do you love your houseplants? Tweet us a pic of your babies @BritandCo!

From Your Site Articles
Kimberly Wang
Kimberly Wang writes about all things pop culture, tech, style, and beauty. She's a Bay Area transplant and has an MFA in Creative Writing from Columbia University. On a sunny New York day, you can find her hanging out with her mini schnauzer Isabelle Jellybean on a blanket in Central Park.
Adulting
Garden
Adulting Home Decor Plants Succulents
More From Garden

How to Repot Your Plants Without Killing Them

7 Blooms You Can Plant Now to Bring on Spring