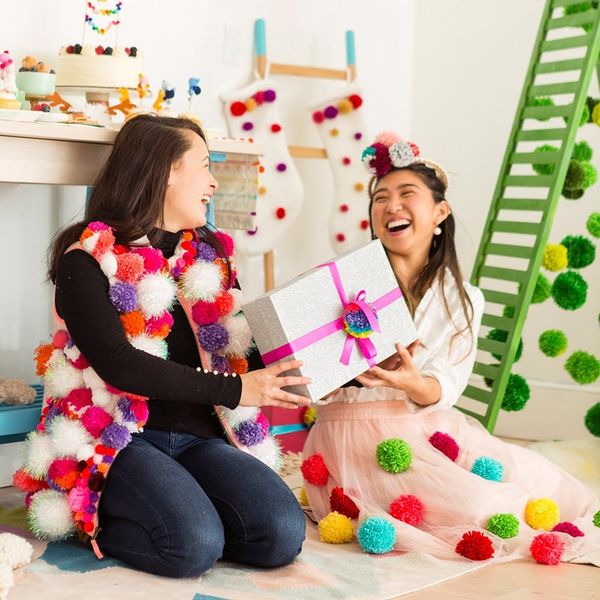 Pom-poms have been ruling our homes, wardrobes, and hearts for all of 2017. So we decided to pay homage to the fluffy accent by throwing an all pom-pom Christmas. From the tree to the presents to the cake topper (and even the apparel), everything here is covered in poms. We totaled a whopping 425 pom-poms at this party! Follow along for all the pom-pom DIYs we covered in this perfectly on-trend Christmas get-together.
There are a total of 18 pom-pom DIYs in this scene. Can you find them all?
Let's start with the tree. We took a modern approach to the tree by creating the frame from a ladder. We bought a shelf system that looked like a ladder and spray-painted the base green. To add the greenery, we used four skeins of various shades of green yarn and started making pom-poms. We then used fishing line to hang the pom-poms at different lengths within the opening of the ladder.
The various shades of green will add depth to your tree and give it an ombre feel.
This star-shaped letter board tree topper is so easy to make. Just dress up your letter board with a pom-pom trim to give it an extra unique touch.
Since this is a pom-pom party, every corner needs to be occupied with the goods. Add a pom-pom garland to the ceiling and a pom-pom skirt under the tree.
A Christmas party isn't complete without a holiday wreath and mistletoe. To make the wreath, you'll need a decent amount of pom-poms, but the mistletoe is less dramatic (only needing three pom-poms and greenery made from felt).
How cute are these pom-pom stockings?! Give your old stockings new life with this DIY upgrade. Just sew 'em on to add that pom-pom pop.
Our secret to making every present a winner? Adding a pom-pom topper, of course! We promise it will make any subpar wrapping job look like a million bucks.
Munch the bulldog wanted to get in on the presents too, so we gifted her a pom-pom dog collar.
2017 was the year of saying goodbye to the flower crown and hello to the pom-pom crown. Dress up your dude in a pom-pom bowtie. Simply add a few pom-poms onto a ribbon and tie into the neck of their collared shirt.
This skirt gives us life. (Insert praise hand emoji here.) We bought a tulle skirt from H&M and gave it a classic pom-pom makeover. All you'll need is yarn and your trusty hot glue gun to get this DIY done.
If skirts aren't your thing, then try a pom-pom vest. Stick to neutral colors to create an everyday shag vest or go crazy and vibrant to make an ugly sweater that will turn heads.
Your dessert table should be pom-filled too. Start with a DIY table runner trimmed with rows and rows of pom-poms. Don't be afraid to mix colors!
Pom-pom cupcake and cake toppers are a simple way to keep the theme alive at your sweets station. Pro tip: These toppers can even be stir sticks for your cocktail bar.
Set the mood with a DIY pom-pom chandelier. You'll want to use two different sized embroidery hoops to create the tiered chandelier and then cover them with pom-poms. Add tassels to each layer and then tie together with braided yarn.
Fill the dessert table with round foods that mimic the shape of pom-poms. We suggest cupcakes, donuts, and wheels of cheese. Munch was really happy that there was cheese.
Merry pom-pom Christmas to all and to all a good night.

Show us your latest pom-pom project by tagging us on Instagram + using hashtag #iamcreative!

Show us your latest pom-pom project by tagging us on Instagram + using hashtag #iamcreative!

Kelly Bryden
Kelly Bryden, an east coast native, is stoked to be a part of the Brit + Co team. Design, DIY, and fashion are her passions. If she isn't crafting you can catch her on the dance floor or wrapped up in aerial silks.
Christmas
Party
Christmas Christmas Tree Holiday Ornaments Tree Topper Ugly Christmas Sweater
More From Party