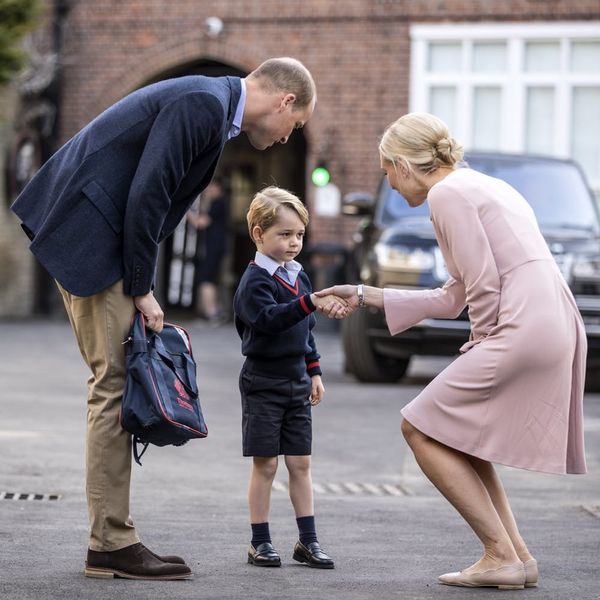 It’s been a big week for the royal family. On Monday, Prince William and Duchess Kate announced that they’re expecting their third child, and the public and close family celebrated the exciting news. Now, all eyes are on the couple’s oldest son, Prince George, as he starts his first day at his new school — looking absolutely adorable, naturally.

George, four, held onto his dad‘s hand as he arrived at Thomas’s Battersea private school in London this morning. Duchess Kate originally planned to accompany him as well, but was unfortunately not well enough, People reports. As Kensington Palace announced earlier this week, she is again suffering from hyperemesis gravidarum, which causes acute morning sickness. She also experienced it during her pregnancies with George and Princess Charlotte.

This morning Prince George, accompanied by The Duke of Cambridge, attended his first day of school at Thomas's Battersea in London. Their Royal Highnesses were met by the Head of Lower School on arrival, before The Duke took Prince George inside to his reception classroom.

Nevertheless, George seemed relatively calm as he walked up to the school and shook hands with the Head of Lower School, Helen Haslem, who took the young prince to his classroom. As expected, he wore a school uniform: navy blue shorts, a navy blue sweater with red stitching, and a light-blue collared shirt underneath.

In honor of his first day, Kensington Palace shared photos of Prince William and Prince Harry’s first-day-of-school looks, too. Both boys attended Weatherby, where the uniform included a gray blazer with red stitching, and a matching gray and red hat.

Take a look at The Duke and Prince Harry on their first days of school 📚 pic.twitter.com/RkL1MUbC4Q

George’s new school is closer to his family’s home in London, where they recently relocated following Prince William’s final shift as an air ambulance pilot.

Prince William revealed this week that Middleton is still “get[ting] over this first bit” of her pregnancy-related illness, but that they look forward to celebrating once the worst has passed. With any luck, she’ll be able to join George for a morning school drop-off in no time.

Do you remember your first day of school? Let us know @BritandCo!