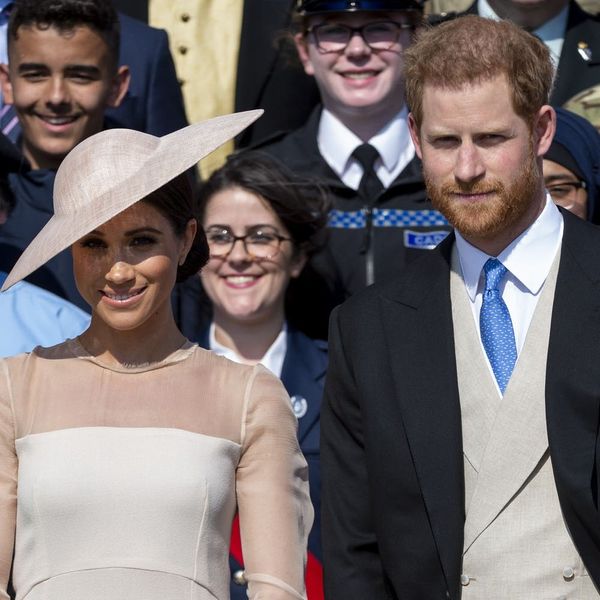 Prince Harry and Meghan Markle made their first official appearance as the Duke and Duchess of Sussex on Tuesday, May 22, at a Buckingham Palace event to celebrate Prince Charles six months ahead of his 70th birthday. Before Harry turned the spotlight on his father, though, he took some time to acknowledge the first responders in attendance at the event, which occurred on the one-year anniversary of the Manchester concert bombing.

“I would like us to take a moment to remember all those affected by the tragic events at the Manchester Arena a year ago,” the prince said in his remarks. “We are fortunate to have over 250 representatives from the Emergency Services here today. It is right that we take a moment to recognize the amazing work they do every day and how each member of our Blue Light Services rise to meet the challenge of tragic events such as the attack a year ago. We are also joined by Youth United Cadets. Their organization also provided triage support to the medical crews on the attack.”

He continued: “So, on behalf of my family and everyone here, I would like to say thank you to the Emergency Services and all those who supported the injured and affected. My brother, William, would be here today, were he not attending the service in Manchester to honor the victims, their families, the Emergency Services ,and the survivors, this afternoon. Our thoughts are with those who lost loved ones and those still dealing with the experiences of that night.”

Harry went on to speak about his father, who is the patron or supporter of more than 400 organizations across the commonwealth. “As I was preparing for this afternoon, I looked through the long list of those who had been invited,” he said. “Pa, I was again struck by the range and diversity of the work which you are involved with. Currently there are your two major charities, The Prince’s Trust and the newly formed Prince’s Foundation, which has brought together your work supporting vulnerable young people in society, the built environment, culture, heritage, and education. These sit alongside your 18 military associations and more than 420 patronages, ranging from music and the arts to rare breeds and plant life. Although the subjects vary enormously, I know that the way in which you work with each of them does not.”

Speaking of his father’s “infectious” enthusiasm for charity work, the Duke of Sussex continued, “It has certainly inspired William and I to get involved in issues we care passionately about and to do whatever we can to make a difference. In fact, many of the issues William and I now work on are subjects we were introduced to by our father growing up.”

At one point during his speech, he had to pause to swat away a bee, which made Markle — who was standing off to the side with Prince Charles and Camilla, Duchess of Cornwall — break into laughter. “Sorry, that bee really got me,” Harry quipped. (See the moment at around 4:40 in the video above.)

“So, Pa, while I know that you’ve asked that today not be about you, you must forgive me if I don’t listen to you — much like when I was younger — and instead, I ask everyone here to say a huge thank you to you, for your incredible work over nearly 50 years,” he continued after regaining his composure. “Work that has given self-confidence and opportunity to thousands of young people who might not have had the best start in life; or to champion causes like climate change long before almost anyone else was talking about it; and above all, for your vision and ability to bring people together to make change happen.”

Have you ever had a special celebration for a parent? Tell us about it @BritandCo!