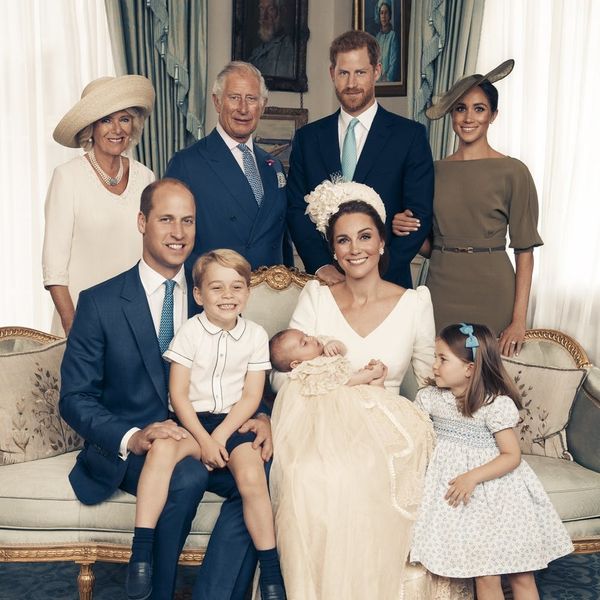 Prince Louis’ christening took place one week ago on Monday, July 9, at the Chapel Royal at St. James’s Palace, and now the official portraits of the day have been released to show the joy the family experienced.

The first of four adorable photos, which were taken by photographer Matt Holyoak in the Morning Room at Clarence House, features the royal family along with Duchess Kate Middleton’s family, including her parents Carole and Michael Middleton, brother James Middleton, sister Pippa Middleton, and Pippa’s husband, James Matthews.

Another portrait features just the royal family, including Prince William, Duchess Kate, Prince Louis, 12 weeks, Princess Charlotte (holding Louis’ hand!), 3, and Prince George, who turns 5 this month, along with Prince Harry and Meghan Markle, and Prince Charles and Camilla, Duchess of Cornwall. Queen Elizabeth and Prince Philip were not able to attend the christening due to other work commitments.

A third portrait shows off the new family of five, with George and Charlotte looking as photogenic as always and Middleton and her newest son, Louis, sharing a loving gaze.

In the fourth photo, just Middleton and Louis get to be front and center as the proud mom smiles down at her infant son in the Clarence House gardens.

“I was truly honored at being asked to take the official photographs at the christening of Prince Louis, and to witness at first hand such a happy event,” photographer Holyoak said in a statement. “Everyone was so relaxed and in such good spirits, it was an absolute pleasure. I only hope I have captured some of that joy in my photographs.”

Prince Louis wore the christening gown also worn by George and Charlotte. It’s a replica of the one made for the christening of Queen Victoria’s eldest daughter, Victoria, Princess Royal, in 1841.

What do you think of the royal family’s christening portraits? Let us know @BritandCo!