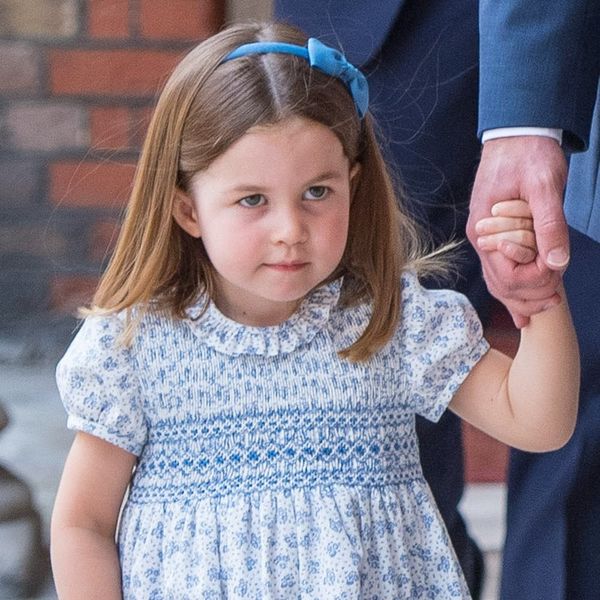 Monday, July 9, was a big day for the royal family, as Prince Louis was christened at the Chapel Royal at St. James’s Palace. And while the 11-week-old was obviously the center of attention, his older siblings, Prince George and Princess Charlotte, made quite the impression as well.

When the royal family arrived shortly before 4pm, Duchess Kate Middleton held a sleeping Louis close to her chest, his elaborate christening gown draped over her arms. Prince William walked a few steps ahead of them, holding hands with George and Charlotte.

Prince George, who will celebrate his fifth birthday in just a couple of weeks, looked adorable in a white shirt with navy piping, matching navy shorts, and navy socks and loafers. His three-year-old sister, Princess Charlotte, also coordinated in blue, donning a blue and white patterned dress with blue Mary Jane shoes and a matching bow-topped headband.

With some gentle prompting from their dad, the two young royals stopped to greet church officials before they entered the chapel. Charlotte was obviously aware of the photographers snapping pics of her family, but she didn’t offer one of her famous waves this time.

After the ceremony, the family left the chapel to head over to Clarence House for a private tea. Louis appeared to be awake, still tucked in his mother’s arms, while George and Charlotte once again held Prince William’s hands.

Prince George had his own christening on October 23, 2013, a little less than two years before Princess Charlotte was christened on July 5, 2015. Both wore the gown Prince Louis is wearing, which is a replica of the one made for the christening of Queen Victoria’s eldest daughter, Victoria, Princess Royal, in 1841.

Do you like seeing Prince George and Princess Charlotte at royal events? Let us know @BritandCo!

Desiree O
Desirée O is a ‘Professional Bohemian’ who loves anything and everything related to the arts, entertainment, and pop culture. She ADORES being a ‘Newsy’ for Brit + Co, covering all of the latest tidbits of awesomeness that you want to read about. When she’s not writing, she’s either making messy art, going on long adventurous walks with her camera, or poking around over at bohemianizm (http://www.bohemianizm.com/). You can find out about Desirée O and her work at http://DesireeO.com/ or follow her on Twitter @DesireeO.
Royal Family
Pop Culture
Royal Family