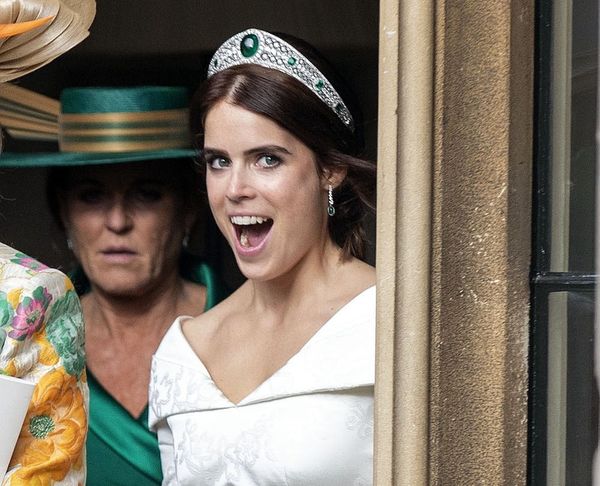 After saying “I do” in a star-studded ceremony at St. George’s Chapel on Friday morning, Princess Eugenie and Jack Brooksbank joined their 800 guests for a stand-up lunch reception at St. George’s Hall in Windsor Castle. Complete with delicious finger foods (think “mini bites of beef in Yorkshire pudding and little Scotch eggs,” according to People) and lovely company, the reception was no doubt a great time, but the party really started at their nighttime reception.

After leaving Windsor Castle in a James Bond-worthy Aston Martin DB10 sports car (which appeared in the 007 Spectre film), the newlyweds reunited with family and friends at the Royal Lodge — Prince Andrew’s royal residence in Windsor — for a laid-back evening reception, which, as People confirms, is where they “let loose.”

The carnival-themed bash was set up inside a tent on the estate’s grounds and featured plenty of fall accents, including a “cascading floral display in autumnal colors” and trees covered in garlands of LED light, as well as games and plenty of other surprising choices, the Daily Mail reports.

First up, there was the food. Comfort food, to be exact. Rather than sitting down to a formal multi-course dinner, guests dined on pies from a gourmet pizza truck and sipped on the refreshing cocktail of the night: Casamigos margaritas. (The groom is a brand manager for the tequila brand founded by George Clooney and Rande Gerber.)

The black-tie affair, which was a “no-phone zone,” according to Town & Country, saw many familiar faces, including Demi Moore (who stunned in a black strapless Stella McCartney gown), Naomi Campbell, Cara Delevingne, and Robbie Williams.

The British singer (whose six-year-old daughter Theodora took on bridesmaid duties earlier in the day) actually took the crowd by surprise when he decided to provide a little entertainment and “jumped on stage,” Page Six reports. According to People, in addition to belting out his own hit singles, including “Angels,” he also tried his hand at some classics “from different artists that the crowd sang along to.” Talk about a good time. Congrats to the happy couple!

Which has been your favorite royal wedding? Tweet us @BritandCo.