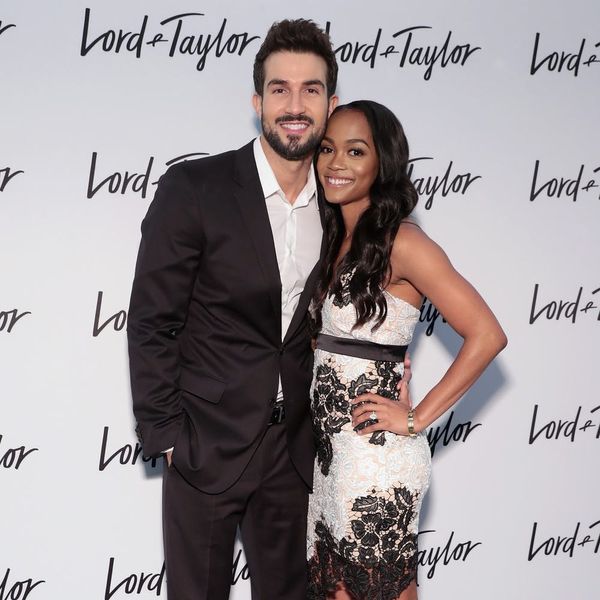 TheBachelorette‘s Rachel Lindsay and her fiancé, Bryan Abasolo, are still deciding where they’ll live, but this weekend, at least, their home base was Abasolo’s hometown of Miami, where they attended a concert, celebrated their engagement, and spent time with his extended family. In between parties, he decided to take Lindsay to meet another important woman in his life — his grandmother.

With the pair in Miami over the weekend to party at the Y100 #Mackapalooza, Abasolo’s Instagram stories were coming in fast and furious as the pair danced poolside to the likes of Noah Cyrus and Austin Mahone. Later that evening, Abasolo’s family gathered at an Italian restaurant for their engagement party, where Lindsay met Abasolo’s beautiful grandmother.

“Grandma’s approval is always important…of course she passed the test w/ flying colors 🇨🇴💛💙❤️ #Miami #familytime #grandmaslove,” Abasolo wrote alongside the post. It wasn’t just family who celebrated the couple, however. Some of Lindsay’s former Bachelorette suitors were on hand to support Abasolo and celebrate the couple’s engagement, too.

Posing with William Gaskins, Matt Munson, and Josiah Graham, AKA “The Rose Boys,” Abasolo showed that at the end of the day, competitors can still be friends and support each other, which this crew clearly does.

Lindsay enjoyed her weekend as well, sharing snaps of their engagement party, including a photo of her and her future mother-in-law snuggling up for the cameras. “About last night…,” she wrote of the party. “So much fun celebrating our engagement with family and friends #miamiedition #miaminights #familytime”

How did it go when you met your partner’s family? Tell us @BritandCo!

Kat Armstrong
Kat has been a writer, social media maven and mom for longer than she's willing to admit. She's also spent time in front of and behind the camera, interviewing celebs, politicians and acting as a producer for fashion and artistic photography shoots. When she isn't writing for various orgs and publications, she's hanging with her kids, husband and French Bulldog, Peter, in Toronto, Canada.
The Bachelorette
Celebrity News
The Bachelorette