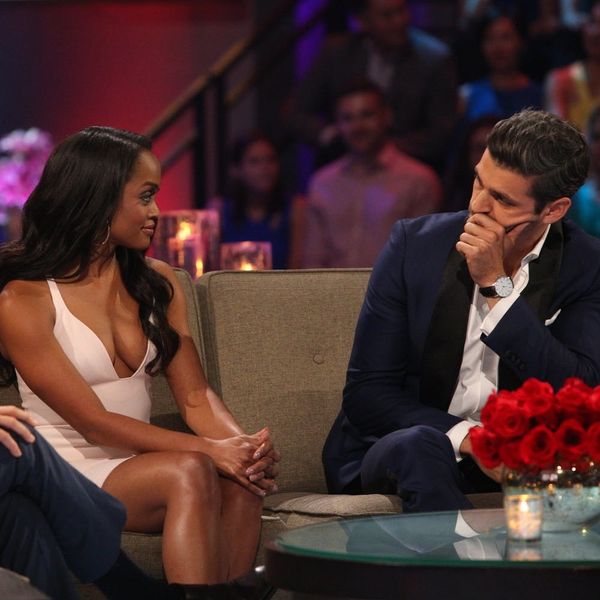 Now that The Bachelorette‘s Rachel Lindsay is engaged to Bryan Abasolo, the pair are making the rounds. Their first stop last night was Jimmy Kimmel Live!, and they followed that up with an early appearance on Good Morning America, first via FaceTime and then in studio, where they played a version of “The Newlywed Game” that co-host Michael Strahan called “Couple Confidential.”

Stuck in New York’s infamous traffic, Lindsay talked about her brutal breakup with runner-up Peter Kraus and their reunion during the live portion of the finale.

“Rachel, you were in a very precarious situation yesterday with Peter,” Strahan said. “What if Peter had proposed to you as well? Were you ready to face two proposals?”

“Well, no,” Lindsay said. “He was ready to propose, but I knew he wasn’t the one for me.” When Strahan asked about reuniting with Kraus during the special, Lindsay admitted that it wasn’t her favorite moment. “I hadn’t seen Peter since what you saw last night. It was more frustrating to see Peter than anything else. That was a frustrating breakup,” she said.

Once Lindsay and Abasolo arrived in studio, they played “Couple Confidential,” during which Strahan quizzed them on how well they know each other.

Strahan asked about everything from their TV show preferences to secret talents, and while Twitter is pretty convinced that she picked the wrong guy, the newly engaged pair seemed pretty in sync. Abasolo aced his questions — he knew that his fiancée loves The Real Housewives and Justin Bieber — but Lindsay didn’t know that Abasolo’s special talent is, as he called it, “soccer tricks.”

As for her role as the first Black Bachelorette, Lindsay said, “It was a beautiful thing, I think, for people. I came out and said I was humbled and honored to be the first. But at the same time, I think it opened up the audience to who tuned in to The Bachelorette. I think people got to see me in a powerful position as an African American woman, but also see my journey to find love is no different than anyone else.”

Are you happy with who Rachel Lindsay picked? Tell us @BritandCo!

Kat Armstrong
Kat has been a writer, social media maven and mom for longer than she's willing to admit. She's also spent time in front of and behind the camera, interviewing celebs, politicians and acting as a producer for fashion and artistic photography shoots. When she isn't writing for various orgs and publications, she's hanging with her kids, husband and French Bulldog, Peter, in Toronto, Canada.
The Bachelorette
TV
The Bachelorette
More From TV