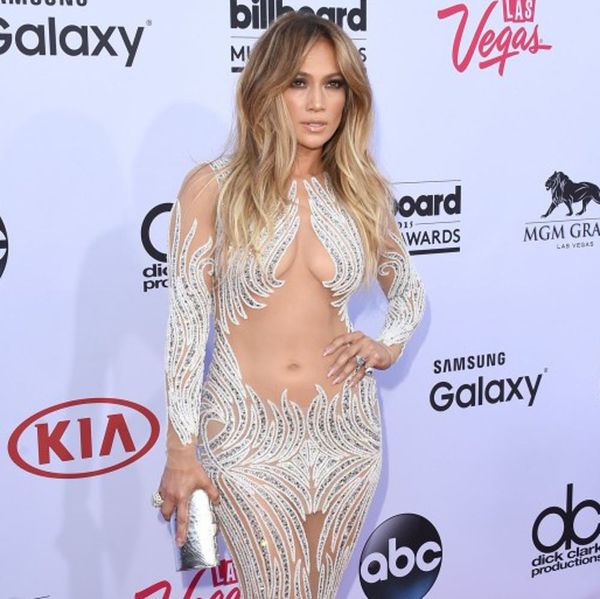 It’s Sunday night, and we’re curling up on the couch, sipping vino and admiring all the glitz, glam and gorgeous outfits on the red carpet for the 2015 Billboard Music Awards. From anything-but-little black dresses to barely there gowns, these outfits stole the show before the show even started. We can’t think of a better way to usher in the new week than with Taylor and the rest of the stars at the BMAs. Scroll on for all our favorite looks from the red carpet.

1. Zendaya: Never one to blend in, actress-singer Zendaya wore another outfit by her Met Gala dress designer, Fausto Puglisi. We’re not always a fan of the matchy-matchy, but Zendaya works this ensemble like the boss she is. (via Jason Merritt/Getty)

3. Charli XCX: Charli’s long black dress isn’t from a designer you know — it’s actually a vintage slip from the ’30s and understated in a way that is total old-school glam, with a hint of witchy attitude. (via Jason Merritt/Getty)

4. Jennifer Lopez: If the Met Gala taught us anything, it was that barely-there dresses seem to be the look every celeb is trying. For J.Lo, this sheer Charbel Zoe number embellished with intricate, glittery spirals takes that look to the next level. (via Jason Merritt/Getty)

5. Idina Menzel: The Frozen goddess herself looked understated in a little black number and nude makeup. (via Jason Merritt/Getty)

6. Kylie Jenner: Showing off her long legs and fierce attitude, Kylie sported a leather Balmain dress cinched at the waist with an intricately carved golden belt. (via Jason Merritt/Getty)

7. Fall Out Boy: These bandmates give us all the early-2000’s feels with their classic black ties and tuxedos. It’s quite the upgrade from their mohawk days. (via Jason Merritt/Getty)

9. Ed Sheeran: Ed’s been killing it this year, so we had to include his everyday look. While the white button down and black tie read classy, the untied sneakers and untucked shirt let us know he’s just one of us. (via Jason Merritt/Getty)

10. Meghan Trainor: It turns out this powerhouse singer is all about the sequins. This floor-length glittery number shows just a hint of leg and strappy heels. (via Jason Merritt/Getty)

11. Bonnie McKee: Not only is Bonnie giving us major ab inspiration with a black crop top and cropped harem pants, but her pastel hair has us ready to to join the pink side. (via Jason Merritt/Getty)

12. Taylor Swift: Taylor and her Balmain jumpsuit are dazzling in this photo. BRB, we’re rewatching the Bad Blood music video over and over again. (via Jason Merritt/Getty)

13. Iggy Azalea: Fuchsia pumps and dip-dyed colored locks are balanced by nude makeup and a gorgeous powder blue crop and skirt combo. It wouldn’t be Iggy without that strategically placed sheer panel. (via Jason Merritt/Getty)

14. Britney Spears: Opting out of the popular cutout and sheer trend, Britney showed her subtle, glamorous side with a long-sleeved beige Yousef Al-Jasmi gown, studded with diamond-shaped beads. (via Jason Merritt/Getty)

15. Chrissy Teigen: Only Chrissy could pull off the plunging neckline and sequined stripes of this Balmain jumpsuit. (via Jason Merritt/Getty)

16. Mariah Carey: From the short Tom Ford dress with that very low neckline, to those Saint Laurent pumps and black shades, Mariah rocked all-black-everything like it was nothing. Guess when you’re as ageless as Mariah, your future is always bright. (via Jason Merritt/Getty)

17. One Direction: They may be one member short, but One Direction is on point with their red carpet looks. They showed up in a mix of an intentionally disheveled tie, a patterned scarf and a printed Margiela T, which is balanced by a Saint Laurent suit, Prada and Christian Louboutin boots and a Paul Smith jacket. It gives them just a touch of that “bad boy musician” look that we love so much. (via Jason Merritt/Getty)

18. Nick Jonas/Olivia Culpo: Our new crush may just be Nick Jonas and this head-to-toe mauve suit and button down Kenzo. Of course, the arm candy that is Olivia Culpo in that Elie Saab jumper doesn’t hurt. (via Jason Merritt/Getty)

Which celeb look is your favorite? Share your thoughts in the comments below.