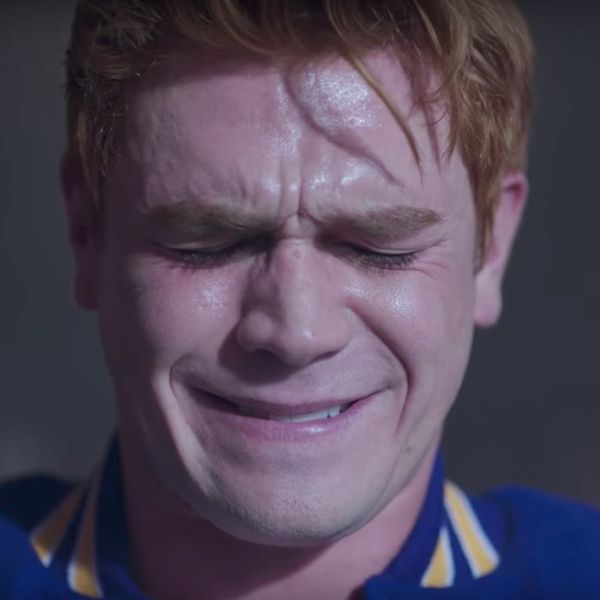 Riverdale‘s sophomore season is still a few weeks away — check out the full list of fall TV premiere dates here — but thanks to this new trailer from The CW, we’re getting a sneak peek at all the drama to come when the show returns next month. And there’s a lot to process in this short, 40-second clip. (Some potential spoilers ahead!)

After a quick glimpse at an idyllic, ordinary day — Archie, Veronica, Betty, and Jughead all hanging out at Pop’s — things take a drastic turn. And that’s putting it mildly.

The trailer flashes through several intense moments in quick succession: We see Fred (Luke Perry) in a dire state after being shot by a masked man in the diner, Archie (KJ Apa) being held at gunpoint and then looking at a lineup of suspects in a police station, Betty (Lili Reinhart) pushing through a set of hospital doors, and then someone (possibly Veronica?) staring at a car seat covered in blood.

And if that doesn’t get your heart pumping, there’s also a sizzling shower scene with Archie and Veronica (Camila Mendes), as well as a Bughead make-out session between rumored IRL couple Cole Sprouse and Lili Reinhart.

But lest we get too caught up in the romance, there’s a Southside Serpents jacket hanging on Jughead’s wall to remind us that it’s not all hearts and hookups ahead.

Keep your friends close. Your enemies closer. #Riverdale returns Wednesday, October 11 at 8/7c only on The CW.

We also see glimpses of Cheryl Blossom (Madelaine Petsch) sitting bedside in the hospital, Mr. Lodge (Mark Consuelos) glaring at someone (or something) across the dinner table, Veronica carrying a bouquet at what appears to be a wedding, and Mrs. Andrews (Molly Ringwald) winking at the camera.

After watching it, we have so many questions. Which is just the way we like it… for now. But we can’t wait for the answers to drop when Riverdale returns in less than one month on October 11, 2017. (In the meantime, watch these other shows to fill the Riverdale-shaped hole in your heart.)

Are you excited for season two of Riverdale? Let us know @BritandCo!