Why This Creative Couple Got Married in a Rock Climbing Gym 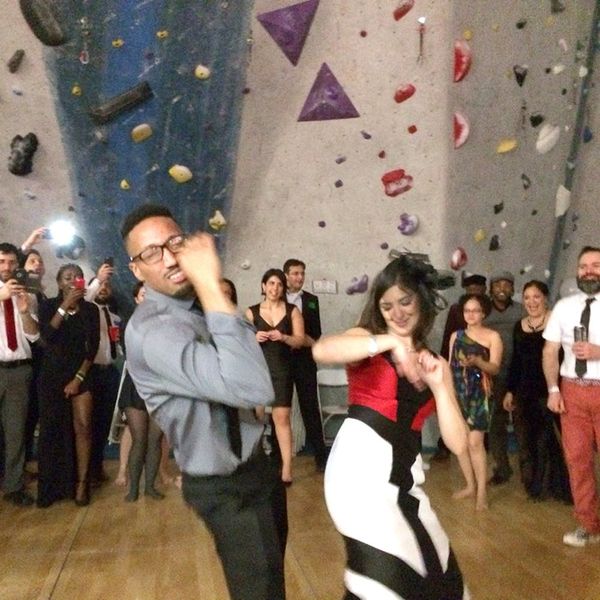 As far as weddings go, things don’t get less traditional than the union of Zoe Reiches and Stephond Goler. Did they marry in a church? No. Did she wear a white wedding dress? Nope. Did they recite those classic, prewritten vows? Definitely not. Instead of a cookie-cutter ceremony, Zoe and Stephond decided to ditch the status quo and tie the knot in a rock-climbing gym.

Zoe tells us the active hobby is something she and Stephond often do together as a couple. “There’s a lot of great partner work in climbing,” Zoe says. So when it came time to begin planning a ceremony, this alternative venue came to mind. “We knew we didn’t want a religious setting. We were looking for something cool and funky and very us, and we ended up at the gym. It presented a ton of challenges but worked out awesomely in the end.” After looking at a few different gyms, the two decided on Central Rock Gym in Watertown, Massachusetts.

“It’s not a wedding venue, nor is it really an event venue at all,” Zoe says. “Even though the gym had done some events in the past, they had never done events of this magnitude. People wanted to be able to dance, drink, eat and have the evening go smoothly. There were times when everyone had to be gathered together and seated, and logistically it was challenging to figure out the space (especially to fit everyone for the meal).”

The biggest hurdle? The dance floor. Zoe tells us that the squishy floor of a rock-climbing gym proved to be the biggest obstacle by far. Special pieces had to be ordered from the manufacturer, items had to be put together with a wrench… it was an ordeal to say the least.

Zoe walked down the aisle to Europe’s “The Final Countdown” while 190 guests watched. Stephond, a rapper and performer, rapped his vows while Zoe, a professional magician, pulled her vows from her dress before reciting them. After the ceremony concluded, the real party (and workout) began.

So, how exactly do you dress for a wedding where you’re supposed to look nice but climb later? “We told guests they could come in ‘casual cocktail attire, costume changes welcome.’ People who weren’t interested in climbing at all were fine because they could wear a cute dress or slacks. People who really wanted to climb wore something like a dress and spandex,” says Zoe.

And while guests climbed all throughout the ceremony, Zoe didn’t take to the wall at all. We’re guessing it was probably because she didn’t want to change out of that stunning red, white and black gown. Of her offbeat outfit, she tells us, “I’m a magician and it kind of made me feel like the Queen of Hearts. Even though it was really unconventional for a wedding, it had that pure white mixed with these geometric shapes that I just really loved.”

Keeping with the atypical vibe, the couple also opted out of a traditional, all-inclusive honeymoon. Instead, they’re embarking on a trip to Ghana this month where the two have plans to build a school. Zoe actually spent a year there studying and working in an orphanage while she was in high school. Since then she’s been back multiple times to continue her volunteer work.

“Stephond and I started talking about getting married and neither of us felt comfortable with some of the aspects of a wedding. We already live together and we don’t need things,” Zoe says. “He’d never been to Ghana and has heard me talk about it for years. So the way we started to feel good about the idea of asking people to donate their time and energy and money [to the wedding] was to be able to give that back.”

To help fund their first venture as a married couple, Zoe and Stephond have asked guests to skip buying wedding gifts and instead donate to their current Go Fund Me campaign. All the proceeds will go towards covering the cost of the trip as well as covering the building materials and fair wages for contracting and building services to create the school. So far the two have reached just over half of their 50K goal.

Cortney Clift
Cortney is the senior writer and special projects editor at Brit + Co. She typically covers topics related to women's issues, politics, and lifestyle. When she's not buried behind her computer you'll find her exploring New York City or planning her next big adventure.
Non-Traditional Bride
Wedding Planning and Decor
Non-Traditional Bride
More From Wedding Planning and Decor