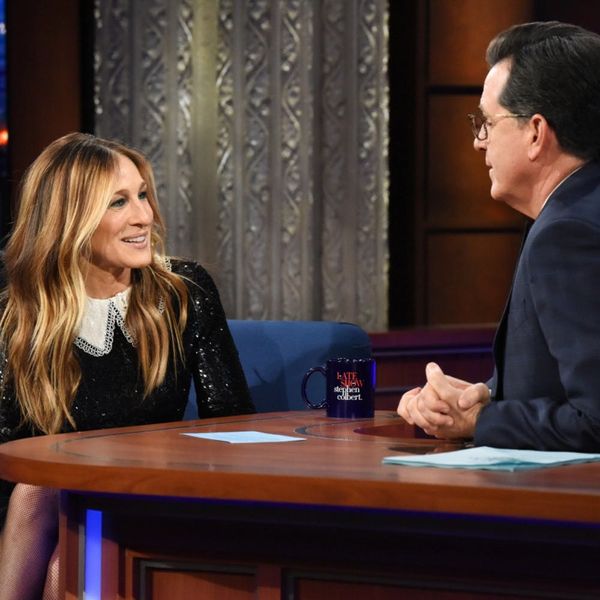 The drama around Sex and the City 3 sparked pretty fiercely at the end of last year, with Kim Cattrall and other cast members trading barbs in the press after reports claimed that she was unwilling to reprise her role as the saucy Samantha Jones. Cattrall herself told fans to move on and even suggested that the franchise could replace her with another actor. Now, SATC star Sarah Jessica Parker has a cheeky idea for someone who could fill the role.

Parker sat down for a chat with Stephen Colbert on The Late Show to discuss her new HBO show, Divorce, but naturally, the conversation drifted to other topics. When Colbert brought up SATC, the actress pretended to be fascinated by the ceiling, prompting the late-night host to joke, “You’re looking up there because you don’t want me to ask you whether there’s going to be a Sex and the City 3.”

Though he didn’t push the subject, he did want to know one thing: Which part would he play? “Well, there’s an opening!” Parker quipped. With a little more prompting, she added, “According to just very recent documentation about why we’re not making it, it’s because the part usually played by Kim Cattrall has been vacated. So, that’s what I mean, that perhaps you’d want to play Samantha?”

Kristin Davis, for one, said back in November that she still has hope for a third movie, so despite SJP making an obvious joke about casting Colbert in the “vacated” role, perhaps the team really should look into a way to revive the project.

Watch Parker speak about the situation for herself in the video below.

Who do you think could replace Kim Cattrall as Samantha Jones in Sex and the City 3? Let us know @BritandCo!