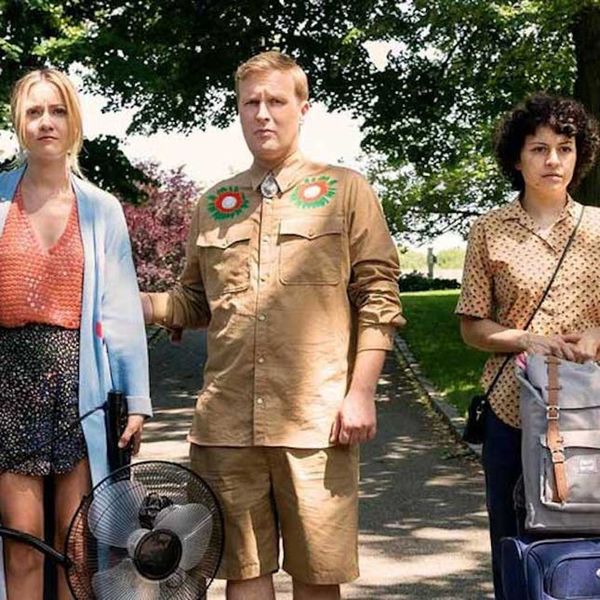 One of the best shows of 2016 returned Sunday, November 19, and didn’t miss a beat from its amazing first season. If you didn’t watch Search Party last year, stop everything right now and binge-watch season one, and then come back here to discuss the season two premiere. If you’re already a fan, let’s dive right in, shall we?

Warning: Spoilers for season one and the season two premiere of Search Party are ahead. Don’t read further if you haven’t watched them.

The second season premiere of Search Party ends with Portia uttering hopefully, “Everything’s going to be okay. You know why? Because we’re good people,” which is just the perfect sentiment for the hilarious, self-centered, directionless characters on this show.

First of all, that’s not the way life works. Oftentimes things do not work out for good people, and bad people get away with terrible things. But even if it were true, these characters are not exactly good people. But that’s what makes them so compelling to watch. They are exquisitely written to be both kind and cruel, both giving and selfish, both good friends and terrible friends. And it makes for a bitingly funny show with a lot to say about human nature, particularly in young people today.

Anyway, season two picks up right where the season one finale left off, with Dory (Alia Shawkat), Drew (John Reynolds), and Elliott (John Early) having killed P.I. Keith (Ron Livingston) in their quest to find missing girl Chantal (Clare McNulty). Dory was completely incorrect about almost the entire situation — Chantal ran away because she couldn’t deal with life, while Keith was just trying to track her down for the reward money. He was sort of attacking her when Drew killed him, but as the show points out, Dory had tased him already.

It’s not murder, but it’s not clear-cut self-defense either, and Elliott makes a convincing case for them to cover up the death rather than turn themselves in. It’s not the best decision, but it makes for a helluva jumping-off point for season two.

So while Portia (Meredith Hagner), Chantal, and Portia’s French-Canadian boyfriend Matthieu (Tomas Pais) party it up, Dory, Drew, and Elliott scramble to buy body-burying gear. They can’t get to work until the other three go to bed, which the other three are not really that into. It makes for a fun middle act of the episode, with tension that one of the oblivious ones might find the body at any moment. And that does happen, though that’s wholly on Portia. Her friends tell her to go back to bed before she finds out something she doesn’t want to know, but Portia can’t let her three friends have a secret that she’s not privy to, so she charges into the kitchen and immediately freaks out upon seeing a dead body lying there, waiting to be stuffed in a suitcase.

The episode is very much the millennial sitcom version of The Americans — remember when they stuffed a body in a suitcase, or when they had to dig a hole and it took an excruciatingly long time? — and it plays out beautifully, with the four leads working feverishly to try to cover up Keith’s death and get him buried in the woods before sunrise. It leads smoothly into episode two, where they decide to make it look like Keith went on a trip somewhere.

They park his car at a train station (did they worry about cameras?), buy him a ticket, and then Dory plants his phone on a train (managing to get herself stuck on it until she can get off at the next stop). On the way back to the States, Chantal starts to freak out about her situation, because telling her family she ran away and made them think she was dead for no good reason is going to be a hard one to explain. Dory comes up with the rather genius idea to have Chantal make up a story about where she was; they neatly tie it in with one of Chantal’s poems about a motel in New Hampshire, and bing, bang, boom, they all have themselves an alibi that puts them nowhere near Keith’s dead body. Of course, any camera located at any number of places will blow holes in their story, but it seems like a good plan on its face.

Presumably, this is still going to unravel at the slightest tug from a law enforcement officer, because what kind of a season of TV would it be if the body stays buried and everyone just goes about their business? But for now, it seems like everyone is in the clear.

Oh, and now that it’s all over, Drew doesn’t want Dory coming back to their apartment since she cheated on him with Keith, and then Drew, ya know, killed him.

So, how are our little Brooklynites going to readjust to their lives after this adventure? Can’t wait to find out. Welcome back, Search Party.

John Early continues to be the absolute MVP of this show. Of course Elliott is the one who holds it together the best, and of course Early is hilarious in doing so.

I have to say, when Chantal took those sleeping pills, then fell and hit her head and got back in bed, I thought for sure she was going to have sustained a concussion and then died while the other four were burying Keith out in the woods.

Elliott: “We were all involved, okay? We all moved the body, and I guess that’s like a felony or whatever.”

Portia: “Digging a grave is just such a weird way to end my day.”

Elliott: “Oh my god, I would never lie about abuse. And I lied about cancer.”

I can’t wait to see how Chekhov’s decorative obelisk comes back into play. Did you see Drew slip it into his backpack? What do you wanna bet he grabbed the wrong one and the murder weapon is still back in the house?

Tell us what you thought of Search Party‘s season premiere on Twitter @BritandCo.