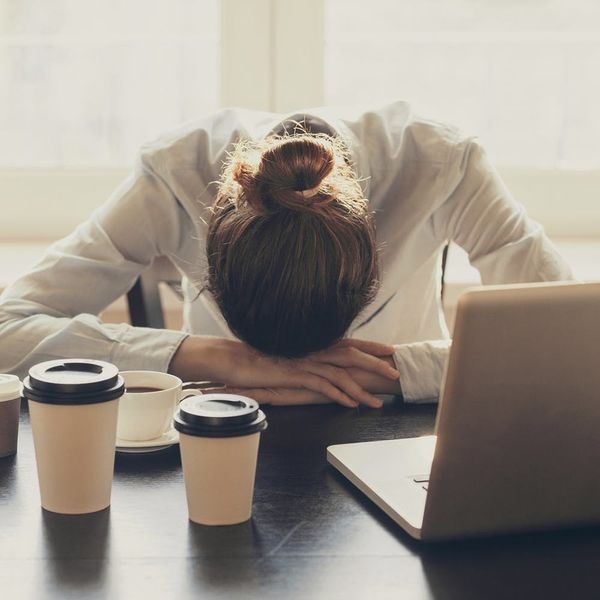 Getting through the day when you haven’t had enough sleep can be a real nightmare. You’re exhausted, maybe have an upset stomach, can’t focus, and generally feel like a hot mess. But it gets even worse: New research also shows that sleep deprivation can have a negative impact on relationships.

The Centers for Disease Control and Prevention (CDC) recommend that adults ages 18 to 60 get at least seven hours of shut-eye a day. Anything less than that, especially on a regular basis, means your body and mind are in a world of hurt. And in fact, that’s the reality for a third of American adults, according to a 2016 CDC study.

While walking around tired may seem like a nuisance, it can have really serious health consequences. The CDC states that getting less than seven hours of sleep on a daily basis can increase the risk of mental distress, high blood pressure, diabetes, and stroke, among others.

Given how dependent physical and mental health are on adequate sleep, it’s no wonder that missing out on the sleep we need is going to affect romantic partnerships as well.

In a study published this February in the Journal of Family Psychology, Florida State University researchers Heather Maranges and James McNulty analyzed sleep and relationship satisfaction data from 68 newlyweds. Maranges and McNulty had the couples keep a daily record of their sleep, how they felt about basic interactions with their spouse, and also how satisfied they felt overall with their relationship.

Across the board, the folks in the study who weren’t getting the recommended amount of sleep each day were less satisfied with their relationship. The study also found that men had a tougher time in relationships when they didn’t get enough sleep. The research also demonstrated that men and women have different experiences when they didn’t get enough sleep.

Maranges tells Brit + Co that men in particular “had a tough time giving their partner the benefit of the doubt when it came to little things in the relationship.” She adds that little things became a big deal to men who were tired. Women, on the other hand, were overall more likely to remain satisfied with the relationship as a whole even when they were tired.

The FSU researchers concluded from their study that good sleep plays a significant role in self-regulating satisfaction in relationships. Psychology Today explains that self-regulation helps us to process everyday highs and lows and how good we feel about relationships. Maranges’ and McNulty’s research suggests that sleep is a vital component for maintaining self-regulation, and thus how satisfying relationships feel.

Psychology Today suggests that coffee is a good solution for maintaining relationship satisfaction, but the National Sleep Foundation says that perking up in the morning with a cup of coffee is no substitute for sleep. Instead, the Foundation recommends that instead of treating sleep problems with coffee, it’s best to work on actually getting enough sleep.

Maranges tells us that couples can also support one another by respecting each other’s sleep needs. She says that relationships will benefit if couples can “try to create a joint schedule that allows them to get as much sleep as they can.”

Keeping regular bedtime hours, sleeping in a dark and quiet room, and only using the bedroom for sleep and sex are among the methods the National Sleep Foundation recommends for getting enough sleep on a regular basis. If partners can help each other out with these tips, they’re going to be in for an overall more satisfying relationship.

Has insufficient sleep had an impact on your relationship? Tell us about it on Twitter @BritandCo.

Elizabeth King
Elizabeth King is a politics, history, and culture writer based in the Twin Cities. She is generally pretty cranky but still enjoys traveling, music from the early 2000's, and plotting the resistance. Feel free to say hi on Twitter at @ekingc or check out some of her work at www.elizabethcking.com.
Sleep
Womens Health
Sleep study