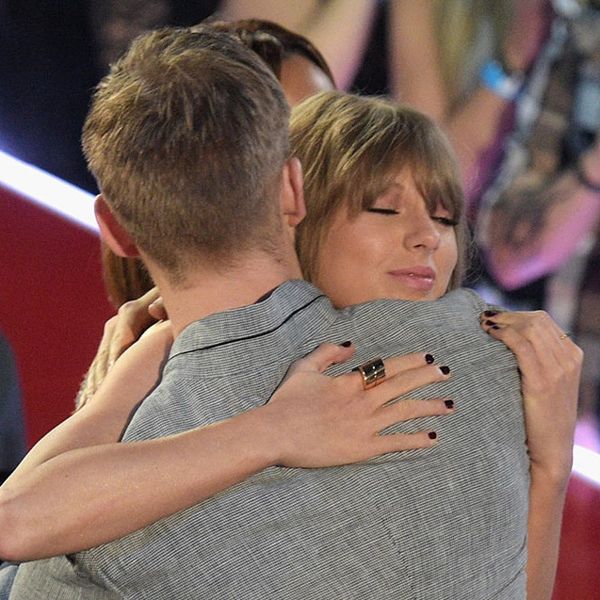 Hello world, are you still breathing? Is your heart still beating? Today marked a very somber moment in history. Hearts broke around the world as Taylor Swift + Calvin Harris’ 15-month relationship came to a quiet end. What happened to #SwanGoals? Who will take custody of the olive tree? To help you cope, we’ve compiled 13 songs to help you get over THE celeb break-up of 2016. Feel free to tear up a bit, hit repeat-repeat-repeat and start counting down the days for Taylor’s next album.

1. Everything Has Changed, Taylor Swift ft. Ed Sheeran: Remember when Ellie Goulding first introduced Calvin + Tay? It was magic. They got to know each other and he met her squad and it was perfect. Unlike this lyrics of this song, everything has changed IN THE WORST WAY.

2. You Belong With Me, Taylor Swift: To help you cope with this traumatic breakup, let’s go through the stages of loss and grief. First: denial and isolation. It’s okay if you still think Calvin + Taylor belong together. We do too… #OliveTreeForever.

3. Mine, Taylor Swift: “You made a rebel of a careless man’s careful daughter. You are the best thing that’s ever been mine.” I mean, that recent style transformation, that trip to Coachella? Calvin definitely made an impression on OG country sweetheart, Taylor Swift. Are we sure its really over?

4. We Are Never Ever Getting Back Together, Taylor Swift: The second stage of coping? Anger. So turn up the volume, sing or scream along, and let him know, TayTay! Weeeee are NEVER, EVER, EVER… getting back together. Like… ever.

5. Picture to Burn, Taylor Swift: Do I need to state the obvious? Plan your revenge, Tay. Go out with his friends, Tay. (Well, maybe not. That’s pretty high school). But seriously, let your hair down and be a little feisty + mad. Maybe die your hair red, a la Bad Blood.

7. I Knew You Were Trouble, Taylor Swift: The third step of coping with loss and grief is bargaining. When we feel helpless and vulnerable, we feel the need to gain control. What does that internal dialogue look like? “I knew his world moved too fast and burned too bright. But I just thought, how can the devil be pulling you toward someone who looks so much like an angel when he smiles at you? Maybe he knew that when he saw me. I guess I just lost my balance.”

8. Teardrops on My Guitar, Taylor Swift: Depression is the fourth stage of coping. Be sure to give your heart time to heal, y’all. Taylor, you too. This song is self-explanatory.

9. Back to December, Taylor Swift: With depression and sadness though, comes a time for reflection. Sure this song is about Taylor Lautner, but the message is still applicable. Think about the relationship, the memories, the good + bad times. Make your peace with the past and then…

10. Shake It Off, Taylor Swift: The fifth and final stage of coping with loss and grief is acceptance. By now, you’ve worked your way through some of Tay’s best songs (some about other boyfriends), but here we are. The ultimate song of acceptance. Just shake it off, Tay. Shake it off.

11. Blank Space, Taylor Swift: With Calvin out of the picture, Taylor is a free gal. We think she’ll focus on friends and family, but she could definitely start dating around too. She’s got a blank space baby, and maybe she’ll write your name. (Warning: Enter relationship at own risk. Break-up song is almost guaranteed.)

12. Begin Again, Taylor Swift: And down the road, maybe this fall or in five years time, a new guy will come along. MAYBE. Let’s be clear, Taylor doesn’t NEED a guy right now. But one might come along someday, and then she’ll simply begin again.

13. New Romantics, Taylor Swift: It’s going to be okay though. Tay has her squad, she has her cats and most importantly, she has her FANS. Appropriately, here is Taylor’s anthem of the summer: Baby, we’re the new romantics / Come on, come along with me / Heartbreak is the national anthem / We sing it proudly. We are too busy dancing / So get knocked off our feet / Baby, we’re the new romantics / The best people in life are free. Enjoy your freedom, Tay.

How are you coping with Tay + Calvin’s breakup? Have a go-to breakup song? Tweet us at @britandco!