17 Recipes to Make With Edible Flowers 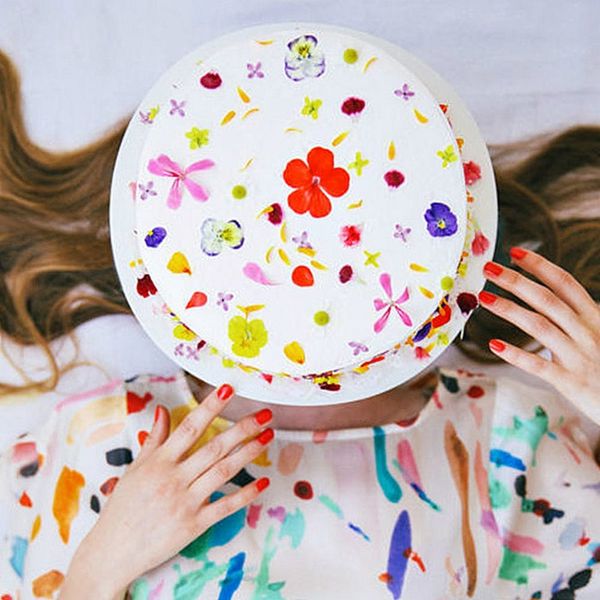 The edible flower craze is popping up all over Pinterest, and soon it will be popping up in our front yards (Yay, spring!). This bright, colorful garnish is making its way into our culinary lives, and we definitely aren’t mad about it. From tasty salads to baked goods AND even cocktails, the floral flavor fever is both pretty and delish. So while we’re jumping on the edible flowers bandwagon, take a look at these 17 recipes that will make you think yummy thoughts when you buy your next bouquet.

1. Flower Salad: You’ll feel like a true flower child eating some brightly colored, fresh-tasting blooms in your greens. It certainly helps make a salad Insta-worthy. (via The View from Great Island)

2. Grapefruit Mocktail: This delicious sipper would be great for a spring baby shower, especially with that bright purple garnish. (via The Merrythought)

3. Edible Flower Popsicles: Here is the perfect treat to snack on after you’ve been working in the garden. Talk about a great way to use up those extra spring flowers. (via Chew Town)

4. Rosy Rocky Road: Glamour up your girls’ night chocolate fix with dried rose petals. Now that’s a recipe we can get behind. (via Ascension Kitchen)

5. Late Summer Veggies: There’s nothing like mixing all the produce in your garden into one delicious dish. And we mean all the produce. (via PDXFoodLove)

6. Pansy Cake: Can’t you just imagine whipping up this delight for Mother’s Day? It certainly rises to the occasion. (via Rikki Snyder Photography)

7. Floral Goat Cheese: Bring some dazzle to your next cheese plate by pressing edible fresh flowers into some cheese balls. (via Gourmet Girl)

8. Lilac and Blackberry Pavlova: Besides decoration, putting these beautiful blooms to culinary use is a lovely idea. We can think of some cool ways to use that lilac blackberry syrup too. (via Katie at the Kitchen Door)

9. Cucumber Sandwiches: This traditional finger food can seem a little dull and cliche to include in your party’s menu, but edible flowers bring new life to the classic combo. (via Food Network)

10. Flower Lollipops: Talk about elegant. The kids won’t be the only ones who will want one of these floral suckers. (via Sprinkle Bakes)

11. Salmon Salad: Fish is a great alternative to hamburgers, and just as yummy. Whip up this salad for dinner one night instead of breaking out the grill. (via Daily Gourmet)

12. Floral Ice Cubes: So. Adorable. These beauties will look best when served with water or bubbly. (via The View from Great Island)

13. Lavender Shortbread: Not only does this recipe call for lavender in the cookies, but it also recommends using dried flowers as decoration. It’s almost too pretty to eat. (via Bon Appétit)

14. Granola: It would be impossible to have a bad Monday if you started it off with this breakfast stunner. (via What Should I Eat for Breakfast Today)

16. Lavender Cupcakes: After seeing these gorgeous cupcakes, it is our belief that all further cupcakes should be decorated with flowers. (via Twigg Studios)

17. Cake With Edible Flowers: Since the edible flowers will be the showstopper anyway, why not put them on a plain white cake that will highlight each and every petal? (via Design Love Fest)

Have you ever done any cooking with edible flowers? Which ones do you recommend? Tell us below!