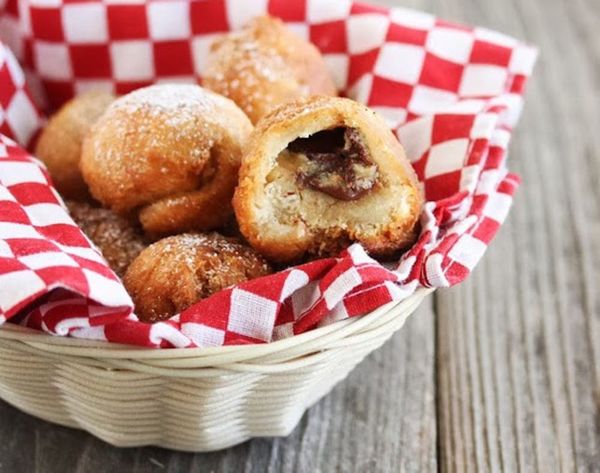 The season’s just not complete until you’ve seen a sculpture made of butter and stuffed your face full of charred sweet corn, funnel cakes and whatever absurd exotic meat you can find. From the classic to the ridiculously ridiculous, we’ve dug up all sorts of recipes to help you make a feast of state fair-inspired foods at home. Your apartment and hair may forever smell like a deep-fryer afterwards, but it’s a small price to pay.

1. State Fair Corn Dogs: Even with all the new, hyped-up, experimental foods each year, there’s nothing like a classic corn dog. This recipe calls for a Dutch oven in lieu of a deep fryer. (via Saveur)

2. Homemade Cotton Candy: So flossy, so sugary, so pink. While you won’t need one of those huge machines they use at the fair for this recipe, it does call for a candy thermometer, parchment paper and a little alteration to your kitchen whisk. (via Goddess Life)

4. Fried Peanut Butter and Jelly Sandwich: This might be the most American thing to ever have happened. We recommend you don’t skip the optional white chocolate ganache topping. U-S-A. U-S-A. U-S-A… (via Leite’s Culinaria)

5. Krispy Kreme Burger: Apparently, Luther Vandross claimed to have come up with the Krispy Kreme burger while on tour. Because, why not? (via James vs. Burger)

6. Puckerin’ Pickle Popsicles: Half of you are probably gagging right now, half (like us) are pretty excited to try this weird pickle juice pop. Cocktail possibilities, anyone? (via Food.com)

7. Homemade Funnel Cakes: Ooh, ooh, ooh! We don’t wonder why nearly every country around the world has some version or another of fried dough. (via A Beautiful Mess)

8. Hot Beef Sundae: Does Indiana know it’s, like, 90 degrees outside during fair time? Their signature fair food is the ultimate comfort bowl — beef stew, mashed potatoes, gravy and cheese piled high like an ice cream sundae. (via Her View From Home)

11. Cherry Pie: If you’re looking to take home a blue ribbon, here’s the secret. (via BS in the Kitchen)

12. Frozen Chocolate-Covered Bananas: There’s always money in the banana stand. This recipe — which mixes the peanut coating with pieces of crispy bacon — is MONEY. (via Leite’s Culinaria)

13. Fried Mac and Cheese Bites: It is your duty as an American to deep fry everything, including macaroni. (via The Little Kitchen)

16. Fried Avocado: Oh, California. You would try to keep healthy with your fair food. Well, not exactly healthy… but it’s no fried Coke. (via The Messy Baker)

17. Deep-Fried Spaghetti and Meatballs On-a-Stick: Minnesota is at it again. Do the laws of physics even apply to this? (via Bon Appétit)

18. Grilled Corn Sweet Corn: If you need a break from all the fried fodder, sweet corn is a must! (via Food Fire)

19. Fried Oreos: Anybody can fry a Snickers bar, but we are partial to the creamy, gooey Oreos. (via Created by Diane)

20. Kool-Aid Pickles: Resist the urge to scream and run away. This is a real thing and apparently it’s not the absolute worst. You can try it at the North Carolina and Texas state fairs — or, now, from your own fridge. (via HGTV Gardens)

21. Cream Puffs: This is Wisconsin’s official dessert. At their state fair, it’s served on a large dinner plate. (via Flourish)

What’s the craziest thing you’ve eaten at the state fair? Let us know in the comments!