STOP EVERYTHING: Thanksgiving Donuts Are Real and They’re Perfect 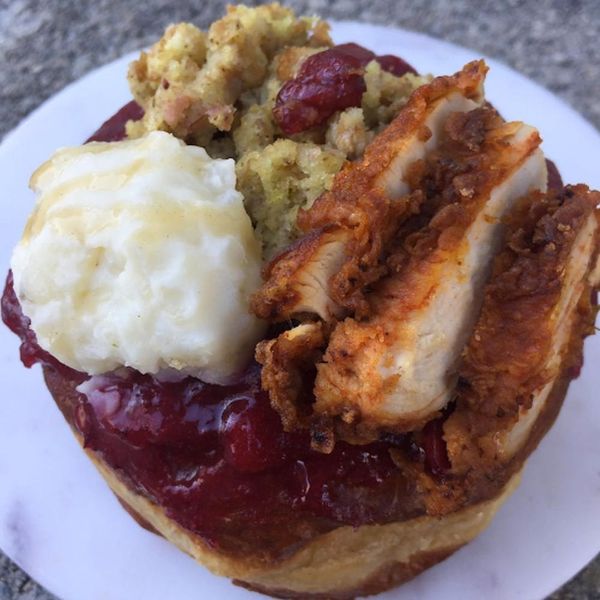 Thanksgiving dinner is a meal that you just can’t get enough of. Something about the combination of turkey, potatoes, stuffing and gravy ALWAYS makes us eat WAY more than we should (guilt free, may we add).

A gourmet donut shop called PVDonuts in Providence, RI, has brought this beautiful creation into the world, and it is giving us life. Named the #FriendsgivingPVD, it’s a brioche donut topped with fried chicken, mashed potatoes, gravy, stuffing and a cranberry glaze. Have MERCY. It’s certainly a far cry from the “kalettes” Brussels sprout + kale hybrid, and we’re very okay with that.

@pvdonuts "Friendsgiving" donut! Line out the door and a packed house for this highly coveted donut! It's delicious...make sure to follow @pvdonuts to see what they are up to next!

According to @goprovidence, people have been lining up out the door and packing out the place to get one of these, and we can’t blame them.

Managed to snag one of @pvdonuts thanksgiving creations this morning... leave it to them to put mashed potatoes, stuffing, fried chicken, cranberry sauce and gravy on a donut. I was a little skeptical - but it works. And dear lord the chicken is good - I might have to check out Bucktown for dinner tonight! #treatyoself #pvdonuts #eatlocal #rifoodfights #eatpvd #rhodylove #thisiswhyimfat #eeeeeats #nofilter

UGH, pure torture for anyone not anywhere near PV Donuts RN. If you’re not lucky enough to nab one of these Friendsgiving beauties, there are some other ways to have the perfect Friendsgiving. Though after seeing this donut, we’re not sure it’ll ever live up to the promise. Sniff.

Would you try the Friendsgiving donut? Let us know over @BritandCo!