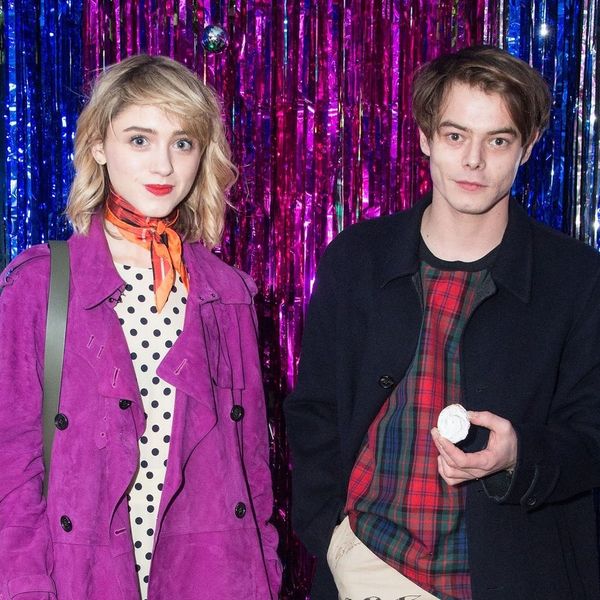 The kids from Stranger Things may be #squadgoals, but Natalia Dyer and Charlie Heaton are total #couplegoals! Their on-screen relationship has been thought to be real life for a while now, and although neither has confirmed or denied the rumors, they sparked even more dating buzz when they stepped out together for an event on Sunday night.

Appearing at the Burberry x Cara Delevingne Christmas party in London on Saturday, December 2, the maybe-couple didn’t dish out any PDA, but they did serve some stylish looks as they posed for pictures side-by-side in their colorful Burberry best.

Dyer, who plays Nancy Wheeler on the hit Netflix show, and Heaton, who plays Johnathan Byers, have been spotted out together in public before, but had yet to make any official appearances as a pair. The rumors of an IRL romance between them started as far back as the spring, when TMZ spotted them at LAX together and grilled them on their relationship. “Whether people are dating or hanging out, I think that our cast is just cool with each other,” Dyer vaguely said. “I won’t speak for anyone else, but it’s just, you know… we’re all one big family.”

Last month, the speculation hit an all-time high when Dyer and Heaton were spotted holding hands and sharing a pair of headphones as they strolled the streets of Paris — a move fitting of their romantic teenaged characters on the ’80s-themed Stranger Things. Whether or not they ever comment further on their personal life, we’re totally here for Nancy and Jonathan.

What do you think of this IRL Stranger Things pairing? Let us know @BritandCo!