Student Story: How Paper Flowers Helped Kristen Risinger Through the Toughest Moment of Her Life 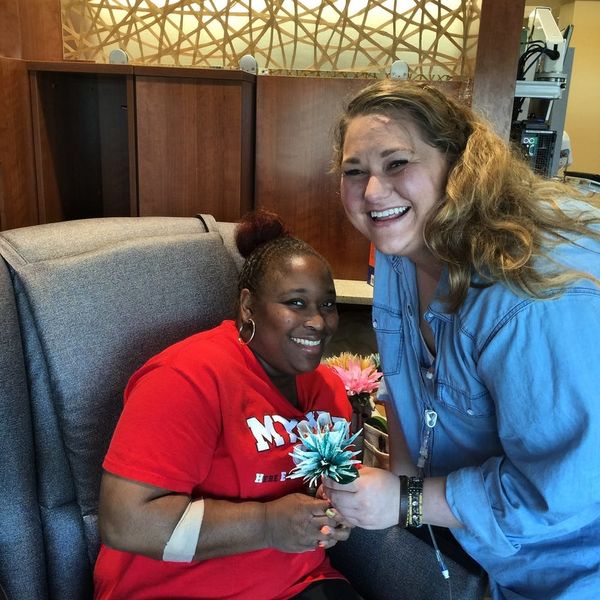 We first met Kristen Risinger in a note that she wrote to us from her cancer treatment center in Waco, TX. She wrote to us about how her life has changed since taking our Paper Flowers Online Class. We read it and it was unanimous: We were going to need to meet this girl in person.

“Three years after my diagnosis, my parents and I had a pow-wow about how to move forward. At that point I was bed bound, had been to virtually every specialist in the country, and the best answer we had was, “Good luck.” Needless to say, that was not an acceptable answer for a 23-year-old. So we shifted gears from, “How do we get better?” to “How do we make the best of this?”

Now faced with more free time than she ever wanted, Kristen started exploring her creativity.

“During this time, my grandmother encouraged me to find creative outlets, hobbies that would engage me mentally without requiring too much focus or physicality. She taught me china painting, and stretching my creative muscles opened up a whole new world for me. I started looking at other creatives, marveling at their skills, and wondering about their process. I also quickly realized I had an advantage over a lot of people my age. While my friends were trying to manage adulthood, I was frozen with a lot of time on my hands — time I could use to learn other creative skills.

“Enter Brit + Co! I signed up for the Paper Flowers online class. I loved that I could do it at my own pace and around my health. It’s so satisfying to make things, especially pretty things that bring others joy. I started taking prepped paper to my infusion appointments at the local cancer center and making flowers during my treatment on days I felt able.”

At first, it was a distraction for the 4-5 hour treatments at the cancer center once, sometimes twice per week. Something to keep her hands and mind occupied and off of the sick feeling she got from being there. She expected some curious looks the first time she showed up to treatment with her tote bag chock-full of paper crafting supplies, and she was right. But what she didn’t expect was for it to open the door for conversation. Like Kristen, other patients were just as eager for distraction. Some watched her, mesmerized as she transformed paper into petals and then into flowers.

“How did I get the color striations? Did the paper come like that? Oh, you paint it, wow that’s a lot of time. That’s really cool. Then I hand them out. The joy on their face — like, “Oh that’s for me?”

“It really gave me a lot of freedom; it gave me a purpose again. Not like I was selling the flowers, or selling anything, or making any money; that was not what it was about. It was about being able to sit down and complete something and have an end result for the time I had spent. It wasn’t just another day had passed with me lying in bed. It was another day had passed and look at these flowers I made.”

That is to say, she wasn’t selling the flowers for herself. But within nine months of starting the class, Kristen filled her apartment with paper flower centerpieces to sell at a fundraiser for a non-profit in town.

“To someone who’s thinking that they’re not creative, I would say I think of myself that way too. People have told me, you need to start an Etsy shop, you need to sell these, you need to do well. But this is not about me making money, this is something that I just like. If you’re doing something that you like, then does it really matter what anyone else thinks about it?”

And to Kristen? That’s the meaning of creativity, and an outlook passed down to her by strong women in her life. See, there is no telling of Kristen’s story in which she doesn’t make her maternal grandmother a main character.

“She just had a gift for looking at something and seeing what it could be. Also for seeing something that she liked, and figuring out a way to make it herself. She wasn’t going to go out and buy new curtains, so she made them. She wasn’t going to pay someone else to do something, so she figured out a way to do it herself. And she did it all before the internet. That term soul mate is kind of ridiculous, but she was mine. When I was struggling, she didn’t ever really say anything. She knew that there weren’t really any words that were going to make it any better. She knew that I was going to be okay, because I was.”

“My life doesn’t look anything at all like I thought it would, but that’s not necessarily a bad thing. While bad things are happening to you, there’s always more blessings than there are trials. She really helped me look for those blessings in the little things, in the little paper flowers of the world. Appreciate them for what they were. They were a way to cope, and a way to find value in yourself in a way that you probably wouldn’t have if you hadn’t had the trials you were facing. That’s something I really admired about her: her gift to be able to not just see the sunny side but to be able to acknowledge the dark clouds in a realness. Also to be able to really relish all the very many good things. In all the blessings that are out there.”

It doesn’t always have to be a tangible product to be creative. There’s a degree of creativity in everyone. It just might come out in a different way.

“This class has changed me because it’s opened up my world. My world is very small. It is my apartment, it is my family and it is the hospital. I’ve learned to be okay with that, but learning this paper flowers thing has opened me up to the nonprofit that I got to work with some incredible people. My circles are getting bigger. That’s something that’s invaluable and intangible that I couldn’t have foreseen before taking the class.”

“It has also changed me in a more direct sense, in that I have learned a new skill. I have learned from the class how to make a peony and a dahlia, but with those skills, all you need to do is change the petal shape and you’ve got a magnolia. There’s not much that you have to tweak to be able to make it your own, and it’s become something new. That’s what I like about it, the freedom to play around.

I’m oddly grateful for it, because I feel like I have a lot of appreciation for the little stuff that are really big things to me. Brit + Co helped me discover that about myself. All from a paper flower. It’s kind of ridiculous.

My grandmother used to say, flowers aren’t perfect either. If you pick a real one up, they’re not perfectly symmetrical. This one has a brown spot. They’re not perfect, but it’s still beautiful. I just choose to believe that there’s a reason for everything. That might be simplistic and naïve, but that is how I cope. If someone can get something out of hearing my story, that is wonderful. It feels very weird, but all I want to do is leave this world a little bit better than it was. A little bit prettier.”

Kristen started back to grad school this fall and is working toward a double Masters in English Literature and Distance Learning.