Why It’s Important to Talk to Your S.O. About Mental Health 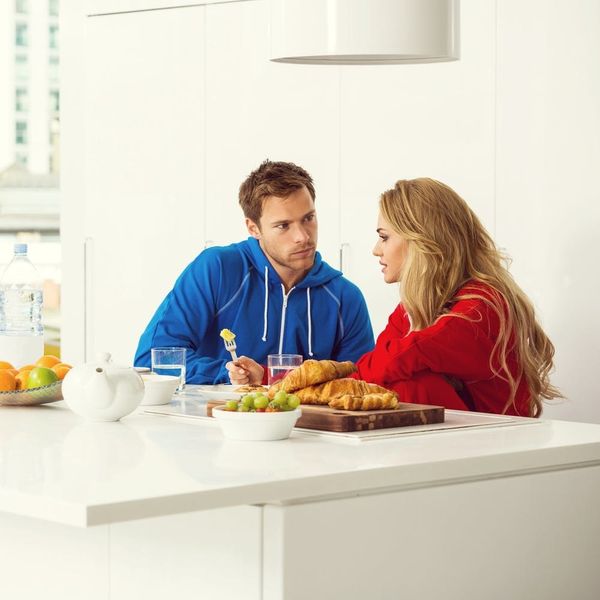 Thanks to celebrities and YouTube stars opening up about their struggles with mental health, the stigma around issues such as anxiety, depression, eating disorders, OCD and the like is slowly falling away. While matters of mental health are now becoming more comfortable topics of conversation in Hollywood, it can still be a challenge to discuss them in our own lives — particularly with our partners.

A recent study surveyed more than 2,000 participants who were or had been in romantic relationships. Over half identified with at least one of a wide range of mental illnesses. The survey's results are an interesting window into the ways we address our personal struggles with our significant others. Some of the key findings:

1. Men are less likely to discuss mental health with their S.O. 52 percent of the men surveyed said their partner was aware of their challenges with mental health issues, compared to nearly 73 percent of the women surveyed. Reina Zelonky, a New York-based therapist who was not involved in the study, says she's seen a similar pattern in her own practice. “Women have a more natural tendency to reach out," she says. “I don't see men as supported by family and community."

2. Most people open up one to six months after starting a relationship. For both men and women who participated in the study, the one- to six-month mark was most often the right time to start sharing about mental health issues. In Reina's experience, couples often avoid conversation about these hot topics until there's a crisis. “In our culture, we're being taught to be so independent and individualistic, which goes against our natural need for connection," Reina says. “Young people aren't learning how to use their relationships for support."

Independent of the study's results, Reina does recommend being honest about mental health, because it creates a culture of trust and safety. “Vulnerability brings people together," she says. “Talking about mental health often has a positive impact because it's a new form of closeness."

While it's important to be open about all aspects of mental health, Reina believes it's particularly necessary to do so when addiction is involved. Because addictions (to food, alcohol, drugs, sex, etc.) are linked to behavior, it's key for couples to have productive conversations about their lifestyle so that the affected partner feels supported in any given situation.

“What people really want is empathy," she says, referencing individuals who struggle with many mental health issues — not just addiction. “People don't always want advice or to be fixed. In order to be supportive, the best thing is to connect, listen and acknowledge the other person's ability to work their way through it."

Are you and your S.O. open with each other about mental health issues? Tweet us @BritandCo!

From Your Site Articles
Alli Hoff Kosik
Alli Hoff Kosik is a freelance writer who is passionate about reading, running, rainbow sprinkles, her lipstick collection, watching embarrassing reality TV, and drinking pink wine. She lives in Brooklyn with her husband and (in her dreams, at least) three golden retriever puppies. Listen to her talk books on The SSR Podcast.
Mental Health
Self Care
mental health Womens Health Relationship Advice relationship advice Mental Health