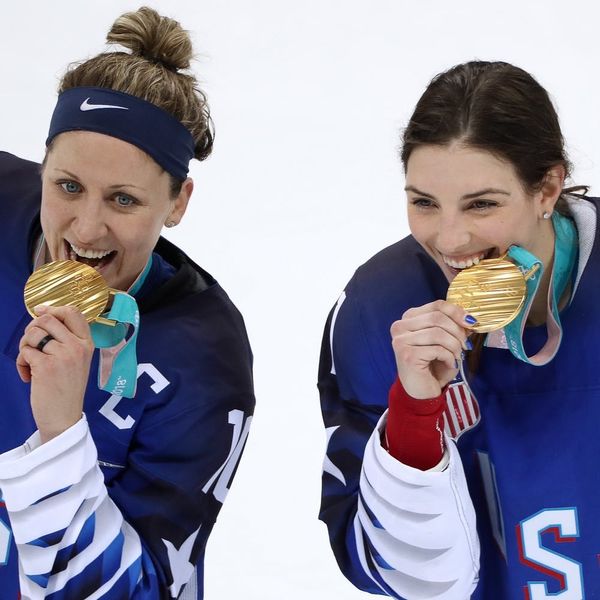 Team USA is celebrating an Olympics victory two decades in the making! The US women’s hockey team defeated their longtime Canadian rivals in Pyeongchang, South Korea, on Thursday to take home the team’s first gold medal since 1998.

The tense game was far from easy for both sides. After ending the third regulation period tied at 2-2, the teams hustled through a 20-minute overtime period without any goals, and followed it up with a penalty shootout that again resulted in a 2-2 tie. It was in the sixth round of the following sudden-death shootout that Team USA’s Jocelyne Lamoureux-Davidson scored her triple-deke winning goal to make the final score 3-2.

If you needed a better look at how DIRTY Jocelyne Lamoureux-Davidson's game winning goal was 😱 https://t.co/wkOWa0qwZl pic.twitter.com/7GRRCOkoNk

“I can’t think about anything except pure pride, excitement, and honor for our team,” team captain Meghan Duggan told the IIHF. Duggan helped Team USA take home silver at the Sochi Games in 2014 and the Vancouver Games in 2010, and says that most of the women have wanted to experience this moment since watching the team’s last gold-medal victory. “To have this experience together, to represent our country, is the greatest honor in the world. It’s one of the greatest days of all of our lives.”

The last time Team USA claimed gold in hockey also happened to be the first year for women’s ice hockey in the Olympics. Canada is a tough team to beat in the sport, having won the last four Olympic gold medals, including at the 2014 Winter Olympics in Sochi, Russia, where they defeated Team USA in overtime.

Many of the Team USA athletes took to Twitter to celebrate their win after the game. Goalie Maddie Rooney told ESPN that her team made the win easy for her. “We did it,” she tweeted alongside a gold-medal emoji and triumphant photo of the winning moment. Forward Hilary Knight also celebrated with a photo collage of herself and teammates showing off their new hardware.

Were you excited to see Team USA’s hockey victory? Let us know @BritandCo!