The 5 Best US Cities to Visit This Fall 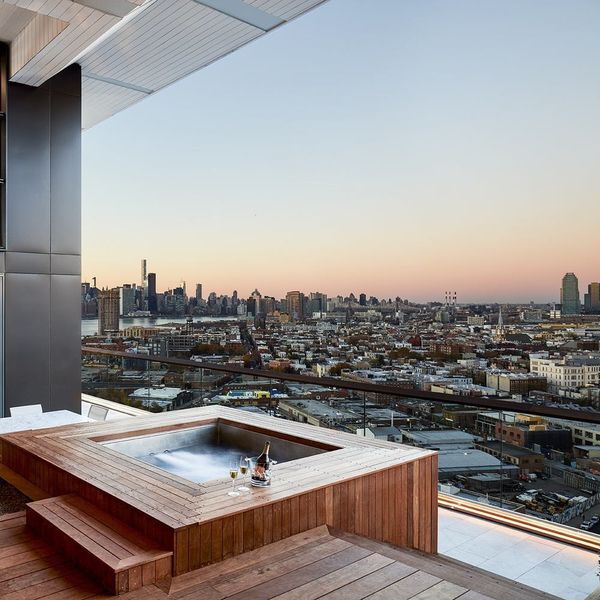 Summer may be all about beach vacays, but autumn is best reserved for city escapes. Take a look at the top spots to travel to right now — like Denver, Boston, NOLA, and Los Angeles — and prepare for a weekend of fun with our picks for where to stay, eat, and play. Oh, and did we mention there are some pretty epic flight deals you could be taking advantage of? We also scored some helpful pricing intel courtesy of Kayak.

When to Go: According to Kayak, the third weekend in September is the cheapest for fall travel to Denver, with airfare hovering around $136.

This modern luxury gem is the first to open in over a decade in the Cherry Creek North neighborhood, so you know it’s going to be good. In addition to a stunning lobby and Insta-worthy guest rooms, the hotel offers up perks like a custom vinyl program, locally developed toiletries, excursions throughout the city with their Gear Garage amenity program (think Vespas, Swiss e-bikes, and fly fishing), a day of pampering with hotel partner Pura Vida Fitness & Spa; complimentary Halcyon Range Rover use, and gourmet dining at the hotel’s Departure Restaurant + Lounge.

Where to Eat: Hedge Row and El Five

Head to Hedge Row to get involved in the wood-fired food craze merged with Middle-eastern spices and El Five for awesome tapas from the Gibraltar region of Spain and killer views of downtown Denver from their elevated perch.

What to Do: Grab drinks at speakeasy Millers and Rossi; cheer on the Broncos; get into the Oktoberfest spirit at Farmland Beer Fest (a craft beer and fair-style food event with corn mazes, go carts, and pumpkin cannons); go brunch running; and get into character at the Halloween-themed Festival of Scarecrows.

When to Go: The third weekend of September is the cheapest of fall travel to Boston, with median airfare coming to $133.

The iconic property, which sits on the edge of the Public Gardens, recently underwent a $15 million renovation, and the newly brightened-up rooms are super dreamy (as are the plush beds). Be sure to brunch at The Bristol for their epic spread and have cocktails in the Bristol Bar before heading out for the evening. PS: There’s an indoor pool on the roof, which also makes never leaving the hotel highly plausible.

Where to Eat: Uni and Committee

The contemporary izakaya restaurant by Beantown greats Ken Oringer and Tony Messina will be your favorite stop on your culinary tour of Boston — we promise. Order the smoked uni spoon (Osetra caviar, quail egg yolk, yuzu), Chiang Mai duck carnitas (green papaya salsa, scallion pancake, baby shrimp), and all the nigiri and sashimi you can handle, then wash it all down with one of their impressive sake selections.

If you want more of a dining-into-lounging scene, then Greek-Med hot spot Committee is perfect. There’s meze, tiki cocktails on the patio, and Boston’s “Hungarian Sensation” Adam Szucs, who has bartended at notable venues throughout Europe. Long after happy hour winds down, this place keeps going.

What to Do: Take a “Duck Tour” to get a history lesson on America’s sixth state; catch a game at Fenway; peruse the shops at Faneuil Hall, see a concert at the TD Garden; visit the Arnold Arboretum in Jamaica Plain for some serious fall foliage; and hear a book reading at the Brookline Booksmith in Coolidge Corner.

When to Go: Kayak says the last weekend in September is the cheapest for fall travel to New Orleans, with median airfare coming to $129.

Where to Stay: Ace Hotel

Located in the Warehouse District, the Ace is where you go to see and be seen. Eclectic, beautiful, buzzing with cool people… it has it all, plus regular live music and a rooftop pool to boot. It’s also close to a gazillion galleries, vintage stores, restaurants, museums, and the must-visit French Quarter. And in true Ace Hotel chain fashion (there are also locations in Chicago and NYC), it has some stellar dining options onsite, like Seaworthy, Alto, and Josephine Estelle.

Where to Eat: Shaya, Maypop, and Saffron NOLA

At three years old, Chef Alon Shaya’s James Beard-winning eatery is still one of the all-time best in The Big Easy. Israeli-Southern cuisine is what he does best, so be sure to order signature items like curried cauliflower with caramelized onions and cilantro, wood roasted cabbage with muhammara, tahini, hazelnuts, and the best falafel you’ll ever have.

Michael Gulotta’s newest venture, Maypop, is another strong contender for your appetite, with its Southern-Asian fusion menu (charred oyster in squid ink bucatini with house bacon and spicy lime leaf crust is a highlight) and famed dim sum brunch.

High-end decor meets authentic Indian food at Saffron NOLA, with bold flavors and an even bolder design aesthetic. This Magazine Street newbie is already gaining mega acclaim for its locally sourced ingredients and insanely good dishes made for sharing, but you’ll be equally as pleased by its over-the-top copper color scheme.

What to Do: Ghost tours, bar crawls, and football reign supreme this time of year, but there are also many festivals worth taking note of: Crescent City Blues & BBQ, Voodoo Music + Arts Experience, Boudin, Bourbon & Beer, New Orleans Film Festival, Krewe of Boo, and Oak Street Po-Boy Festival, to name a few. Fall also happens to be the season when the weather is the best in New Orleans (read: not hot and sticky AF), so make al fresco imbibing a priority at places such as Hot Tin,Monkey Board, and Above the Grid.

When to Go: The third weekend of September (again!) is the cheapest weekend of fall to travel to NYC, with median airfare coming to $131.

Where to Stay: The William Vale

While Manhattan proper might get all the love, trendy downtown Brooklyn is just as fun for fall (and usually cheaper). Hop across the bridge to the uber-cute and very boutique-y William Vale, where you’ll be greeted by mod interiors (and a balcony in every room) and Chef Andrew Carmellini’s addictive eats via in-room dining, or at one of his three culinary concepts: Leuca (for house-made pastas and wood-fired pizzas); Westlight (22nd-floor rooftop bar with craft cocktails and small plates); and Mister Dips (burgers, fries, and — you guessed it — dips served up from the window of a retrofitted 1974 Airstream in Vale Park). There’s also a neverending calendar of health, music, and cultural events and adult- and child-friendly programs, so nobody gets left out.

Where to Eat: Olmsted, Carthage Must Be Destroyed, Birds of a Feather

Farm-to-table is literally the theme at Olmsted; their farmed ingredients come straight from their backyard garden, which BTW you can actually eat in comfortably, considering there are heaters and blankets in the chillier months.

If your jam is communal tables and artsy vibes, then Carthage Must Be Destroyed will be right up your alley. This hyped-up “all-pink” restaurant in Williamsburg is known for its no-Instagram policy, but you won’t even care because its organic fare is damn delish.

Birds of a Feather flock together — to eat spicy Sichuan noodles at their namesake. Come hungry and prepare to leave full, after working your way through their large (shareable) plates of whole fish in chili sauce, tea-smoked duck, and three-pepper chicken.

What to Do: Plan a concert or sporting event night at Barclays Center (also home to the Ringling Bros Circus), or pop over to Brooklyn Academy of Music (BAM) for one-of-a-kind dance, theater, music, and opera performances. You can also picnic in Prospect Park, make the trek to Red Hook for wine tasting at Red Hook Winery, or get to know the local artists on a Graffiti & Street Art Walking Tour. Plus, in October, Brit + Co is hosting our very own pop-up experience in the heart of SoHo, #CreateGood, where you’ll find tons of inspiring speakers, live performances, and creative activities.

(Photo via The William Vale)

When to Go: Once more, the third weekend in September is the cheapest weekend of fall to travel to LA, with median airfare coming to $122.

Where to Stay: The London West Hollywood

Full disclaimer: You could basically live in the glam bathrooms in this hotel — they’re that big and gorge. Aside from the major celeb spotting opportunities at The London, there are also several other factors worth checking in for: all-day rooftop dining and cocktail service, personal concierge offering access to LA’s most exclusive venues, a speciality menu for your pooch to order from, and puppy mascots Winston and Churchill available for petting. I mean, c’mon.

Where to Eat: The Bazaar by José Andrés and Rosaliné

The Bazaar is a gastronome’s delight, thanks to libations that smoke, inventive tapas by the revered chef, and a magical setting with way too many things to look at (and photograph). Do not leave without sampling the “liquid olives.”

What to Do: Walk the Venice canals, hike the trails in Eaton Canyon Falls or Palos Verdes, then sit on the beach, get lost in a haunted corn maze, or spend a day at Tanaka Farms to see the pumpkin patch, get to know a new band at Music Tastes Good, attend the Dragon Boat Festival, and play dress-up for the Veuve Clicquot Polo Classic, where you can sip Champagne and rub shoulders with Hollywood’s A-listers, natch.

(Photo via The London West Hollywood)

Where’s your favorite place to travel? Tag us in your travel pics @BritandCo!