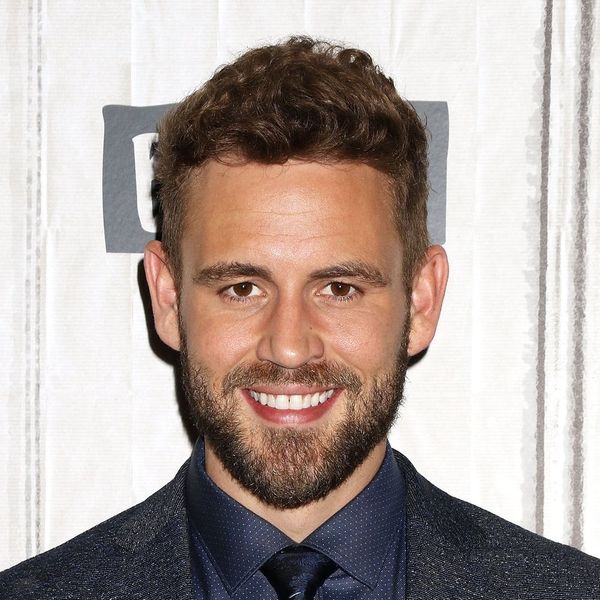 *Warning: This post contains spoilers from the recent episode of The Bachelor, so if you haven’t seen it, stop reading.*

Last week’s episode of The Bachelor was a shortened one, only featuring Raven’s fantasy suite date. This week, however, promises to show both Rachel and Vanessa’s fantasy suite episode in Finland, which will be especially interesting, given that we know the fate of Nick and Rachel’s relationship. We’ll see what happens!

THE END OF RAVEN AND NICK’S DATE

The episode started at the end of Nick and Raven’s fantasy suite date, with the two kissing goodbye. Raven said, “I will say, Nick is pretty good at what he does, so I’m pretty satisfied,” which we can only take to mean that the two were physical and that Raven, indeed, experienced an *intimate first* — especially given the super cute montage the editors gave her the morning after.

Aww, Raven! Seriously, so happy for her. That’s so important.

Has anyone made a really bad joke about Nick's infamous turtleneck being ribbed for her pleasure? #TheBachelor

Nick and Rachel met up and set off on skis to a little log cabin, and she shared her fears about vulnerability with the viewers before sharing them with Nick. She then said that the number one feeling driving her was a feeling of fear, specifically of rejection, which TBH is not a great feeling at this point in the game, and is pretty telling. I’m starting to wonder if maybe what happens is she rejects him, though, because he still seems very into her. The two of them walked outside and saw a sleigh hooked up to some reindeer, which they made out in, because of course.

The two met up again (with Rachel wearing a crop top in below-freezing weather) and Nick bumbled his way through a toast (is he already drunk?). They tiptoed around the “love” conversation, with her asking, “Do you know where you stand with me?” and him answering, “Not quite.” It only got more convoluted from there, with him vaguely urging her to tell him she loved him, including the fabulous line, “If you were to check your ego at the door, what would your heart say,” to which she responded, “that I’m falling in love with you,” after which she burst into laughter and then they kissed. However, he then told her, “Rachel, I am falling for you, 100 percent,” which is more than he’s told any of the other women, which again begs the question — what’s going to happen between these two?!

What if the card said "Sorry I don't see a future for us"? And they had to read their break up. #TheBachelor

They then opened the fantasy suite card and, duh, decided to spend the night together. In the morning, the two cuddled and seemed super happy together. They made breakfast and discussed their future, and Rachel said she was “all in” and confident.

Vanessa was super eager to see Nick after her hometown date was less stellar than planned. (Side note: Can any of these women see Nick without jumping on him like tiny children? I’ve never done that with a partner in my life, am I missing something?) Anyway, though it was literally snowing, their date involved an ice bath for some depraved reason. They wore matching shiny blue bathing suits and beanies to jump in freezing cold water (which they had to walk to barefoot on snow), before walking back to a sauna. They then REPEATED THIS over and over.

Literally no date sounds worse, but Vanessa actually seemed to love it once they started. They both said things about how the two of them could get through anything together, and how it bodes well for a future together — TBH, I hate when contestants take dates like this and make a big deal out of it, like it means something in the grand scheme of life. Just because you can sky dive together or do an obstacle course, it doesn’t mean you’ll survive being laid off from your job or having a miscarriage. But whatever, the two connected… for a minute.

Vanessa, for our date I'm going to give you pneumonia #TheBachelor

Then, they started talking about the idea of being traditional, and Nick called Vanessa’s family “traditional” and said he was nervous about it. She said she didn’t see herself compromising on her core values, and Nick said, “interesting.” She included in this her “Sunday tradition,” which again seemed to make Nick unhappy, though he chalked it up to them being “too similar.” It was a very confusing conversation! He seemed to think they were very different, and be annoyed by that, but then he said they were too similar… I don’t get it, but they ended up cuddling in the hot tub in the end, so maybe the editing just made it look like a bigger deal than it was.

Later, presumably after thawing out and taking showers, they cozied up in a cabin by a fire and Vanessa brought up the question of “being traditional” again, and also of moving. Nick said he would likely not move to Canada because he was “very proud to be an American,” and Vanessa is “proud to be a Canadian,” so that’s not really settled yet. It really feels like both of them is saying during this whole conversation, “Compromise is very important… but you should be the one to do it.”

Then, Vanessa dropped the love bomb, and Nick told the camera that while it was an amazing feeling, he was worried their relationship might have the potential to have more conflict. He said he also thought it had the potential to be incredibly passionate — he sounds very conflicted, and certainly not ready to make any decisions about her. Either way, the two headed off to the fantasy suite together.

Before the rose ceremony, the women all reflected on how far they’ve come with Nick. At this point, they’ve all told Nick they love him, and this is the last step before they’d meet his parents and potentially become engaged. They were all visibly nervous (and freezing) walking up to the rose ceremony. Nick addressed them with a lump in his throat, and he obviously didn’t want to let any of them go — but y’know, he can’t have three wives!

The first rose went to Raven, and she immediately accepted it. Then, finally the second rose went to Vanessa, sending Rachel home at long last. She sat down on a couch with him and seemed unsure what to say, but handled herself with grace. Nick weirdly said, “Selfishly, I hope this won’t be goodbye forever.” What does THAT mean? He gave no indication of why he let her go, and she was the only one he actually gave any statement of love back to during the season. Conspiracy theory time: I think the producers wanted him to let her go to be the next Bachelorette, and he did, and now he’s hoping they’ll somehow date in the future when neither of their seasons work out. (I know: I’m out of my mind, but crazier things have happened — have you seen UnReal?!)

Rachel’s goodbye and limo ride was tearful and heartbreaking, but it’s good to know that she’s the next Bachelorette and that they’re working hard to find a plethora of suitors for her, because she really deserves a chance at (manufactured) love. I’m glad she’s back on top, if just for now.

"back to square one."
only if square one is THE BACHELORETTE hayyyy #TheBachelor

The finale is fast approaching, and to be quite honest, I have no idea who Nick will choose. Raven was a dark horse this season, and this whole Vanessa thing is super confusing. We’ll just have to wait and see what happens next week!

Who do you think Nick will pick next week? Let us know @BritandCo!

Rosemary Donahue
Freelance Editor at Brit + Co. Freelance writer everywhere. I like my dogs more than I like most people.
TV Recaps
Pop Culture
TV Recaps
More From Pop Culture