Is Corinne from The Bachelor Engaged?! 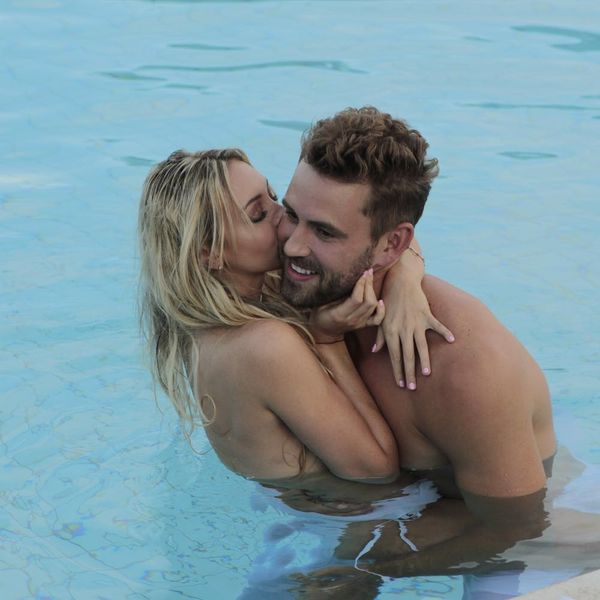 Nick Viall’s season of The Bachelor has definitely found its villain in the wild and wacky Corinne. Making sure to get herself noticed (whip cream, anyone?) while rubbing plenty of folks the wrong way (e.g. wedding shoot pool boobs), Corinne may be seeing her fair share of shade from fans, but she’s also been the talk of the town.

Now, fans of the show have begun to buzz about her even harder after spotting her out and about with a diamond ring on *that* finger. Gasp! Since there’s good reason to believe that Nick is engaged, viewers are speculating (and kinda worried) that Corinne really might be the one.

One of us is a Bachelorette contestant and the other has a nanny.

Posing for a pic with social media personality Claudia Oshry, no one really cared about their sweet smiles or little hug, TBH, ’cause all eyes were on Corinne’s hand and the very visible diamond ring she was sporting.

Fans were quick to leave comments like, “umm ring?” and “she’s got a 💍👀” (not to mention ones like, “omg!! This has to be a sick joke! No way he picks her…” and “STOP IM SCREAMING!!!!”). Though, according to ET, there’s been no word yet from the folks behind the show on whether or not this is a possible spoiler, people are definitely thinking that this time around, the villain may have come out on top.

There still may be some hope, though, as Corinne posted a pic just a few hours ago that shows a close-up of her left hand… in which the ring seems to have mysteriously disappeared.

So is Corinne just messing with us? Or did she actually snag Nick’s heart with her, er, quirky personality? Guess we’ll have to wait and see…

Do you think Nick and Corinne are engaged? Tweet us @BritandCo!

Desiree O
Desirée O is a ‘Professional Bohemian’ who loves anything and everything related to the arts, entertainment, and pop culture. She ADORES being a ‘Newsy’ for Brit + Co, covering all of the latest tidbits of awesomeness that you want to read about. When she’s not writing, she’s either making messy art, going on long adventurous walks with her camera, or poking around over at bohemianizm (http://www.bohemianizm.com/). You can find out about Desirée O and her work at http://DesireeO.com/ or follow her on Twitter @DesireeO.
Engagement Rings
TV
Engagement Rings
More From TV