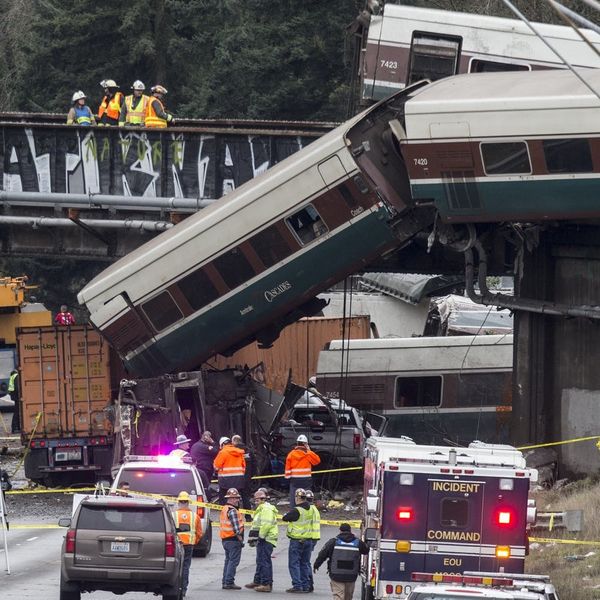 An Amtrak train that derailed in Washington state on Monday was going 80mph in a 30mph zone, officials announced Tuesday.

The Amtrak Cascades 501 was on its first journey on a new more direct route between Seattle and Portland when it jumped the tracks on an overpass, crashing down onto the I-5 highway below. The accident killed three people and injured more than 100 others, reports CNN.

In a press conference Tuesday morning, National Transportation Safety Board member T. Bella Dinh-Zarr told reporters that it was still unclear why the train was going nearly three times the speed limit at the time of the crash.

What they do know is that Positive Train Control, a technology that slows down and stops a train traveling at dangerous speeds, was not activated. It was installed in the tracks but not in the trains — the system connects the two — and was not scheduled to be operational until spring of 2018.

The train was traveling on a new service route known as Point Defiance Bypass. The Federal Railroad Administration funded and reviewed recent upgrades to the tracks, which were previously used for shipping freight, reports NPR. The route had undergone almost $181 million in improvements and weeks of testing before taking its inaugural journey on Monday.

NPR points to a number of officials and agencies who voiced concerns about the route and also about Amtrak’s safety record in general. The NTSB issued a report just last month describing Amtrak’s safety culture as “deficient,” and the mayor of a nearby suburb of Tacoma, Mayor Don Anderson of Lakewood, questioned whether the trains would be safe at the higher speeds planned.

“Come back when there is that accident, and try to justify not putting in those safety enhancements,” Anderson told KOMO News.

The train’s engineer has not yet been interviewed, but the NTSB hopes to complete all interviews within the next day or so.

Does Monday’s derailment put you off of train travel? Tell us your thoughts @britandco.