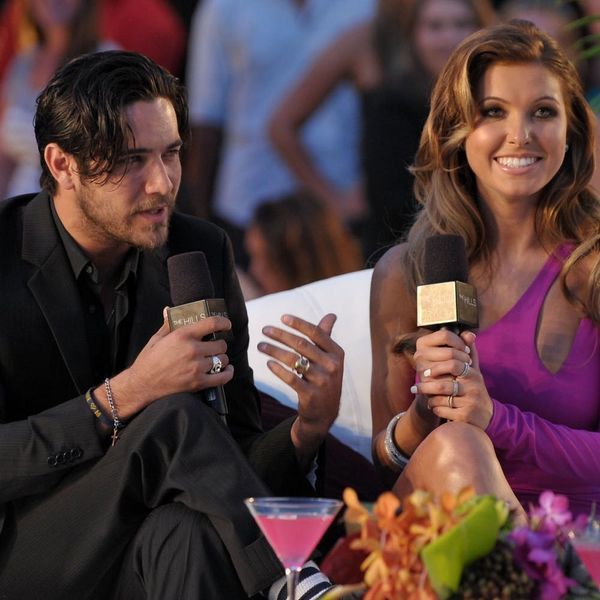 Brace yourselves, The Hills fans. One week after news broke that Audrina Patridge was divorcing her husband of 10 months, Corey Bohan, the reality star’s former on-screen flame, Justin Bobby Brescia, has dropped the bombshell that the 32-year-old mommy of Kirra Max has reached out to him.

According to Brescia, the reconnection came after he commented about his former paramour’s current sitch to E!, saying that he hoped his longtime friend was okay. “My heart and thoughts go out to her and her little one at this time,” he told the outlet.

Now, as he tells Kate Casey on her podcast, Reality Life With Kate Casey, “We’re talking because I made a comment about her, you know, what was happening with her divorce. She had reached out to me and kind of thanked me for just being nice and being a friend about the whole thing.”

In fact, as he shared with listeners, “I’m literally chatting with Audrina right now.”

While he admits their shared romantic story line sparked a real-life courtship between the two (“We would work long hours and do these romantic scenes and then be together and then you know go out and meet people and stuff so it caused a courtship, for sure”), he says they’ve always had a great relationship regardless of their dating status.

“There was always fairly grand mutual respect and consideration for each other, just because we were friends before anything, so we weren’t pushed together by the show,” he says. “I felt like we had a little bond and trust within each other.”

According to Brescia, their fling never became particularly significant, likely due to the nature of their mutually insane schedules, but as he puts it, “Me and her out of everybody [on The Hills] like, you know, had the coolest bond, I feel, I think, I mean, guy-girl bond.”

Listen to the podcast in full here.

What do you make of this rekindled friendship? Tell us over @BritandCo.

Nicole Briese
Nicole is the weekend editor for Brit + Co who loves bringing you all the latest buzz. When she's not busy typing away into the wee hours, you can usually find her canoodling with her fur babies, rooting around in a bookstore, or rocking out at a concert of some sort (Guns N' Roses forever!). Check out all her latest musings and past work at nicolebjean.com.
Celebrities
Celebrity News
Celebrities Celebrity Couples love TV
More From Celebrity News