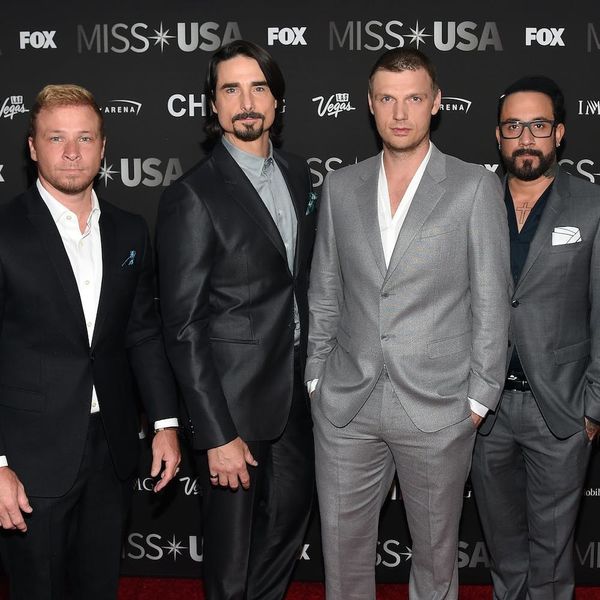 We were excited enough knowing that season 21 of The Bachelor would star Nick Viall, the Bachelorette and Bachelor in Paradise alum who simply can’t seem to catch a break in love. Then, we got a sneak peek of a contestant rocking a veil and things got even more interesting. But we’ve got news that trumps it all, because we’ve just discovered that the upcoming season will include a Backstreet Boys (soon appearing in Vegas) appearance of epic proportions!

That’s right: The 36-year-old Bachelor took seven of the show’s contestants to watch the Backstreet Boys perform at the iHeartRadio Theater in Los Angeles and — get this — they all got up on stage during “Everybody (Backstreet’s Back)!”

Oh hey it's the Bachelor Boys! (Nice moves @viallnicholas28 , but only room for one Nick in our @backstreetboys) #iHeartBSB #BSBVegas pic.twitter.com/yTnaUXDumC

As if that wasn’t memorable enough, the gals, who were dressed in matching red crop tops and black shorts, busted out the song’s choreography in near perfect unison as Nick sang along to the track with a little help from AJ. All of which was captured on video (yay!) by BSB superfan @KoolKiwis. Too cool!

Unfortunately, that’s when things got a liiiittle awkward. According to folks who were in the audience, the group then slipped into an a cappella rendition of “I Want It That Way,” at which point Nick singled out a brunette to slow dance with in the middle of the stage before locking lips as the remaining girls looked on. Eek! We’re sure that could not have been pleasant for the remaining contestant bystanders.

Guess we’ll just have to patiently wait for the new season to see the drama that ensued!

What do you think of Nick being cast as the new Bachelor? Tweet us @BritandCo.

Barbara Pavone
Barbara Pavone is a pop culture-obsessed writer based in beautiful (but ridiculously cold) Montreal, Canada. When she's not working, she's sipping on a Pimm's Cup and daydreaming about her celebrity hero, Saint West.
Music
TV
Music
More From TV