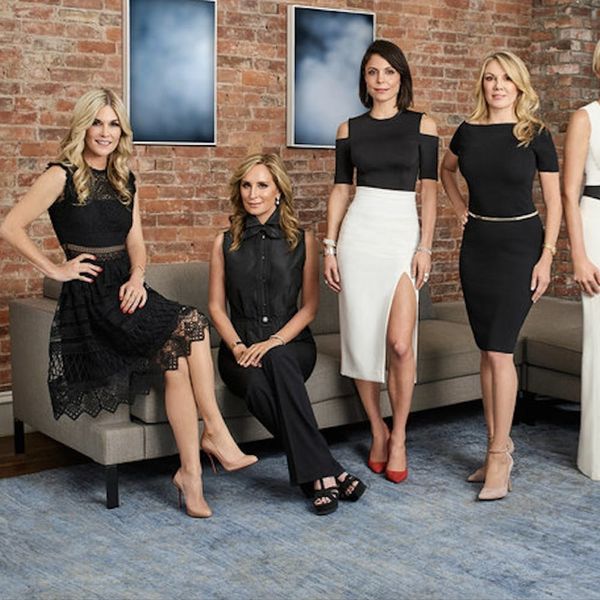 ** WARNING: This post contains spoilers for both RHONY and Big Little Lies. If you don’t want to be spoiled, stop now! **

Let’s not hide our true feelings about the season 9 premiere of The Real Housewives of New York. It is inconceivable to give these bejeweled treasures the care they deserve, as we are all in collective agony from experiencing the end of Big Little Lies. How are we supposed to immediately invest in Carole’s new baby cats who are ripping the crap out of her leopard-print couch or whatever, when just days ago Reese Witherspoon was standing pantsless at the top of some stairs, gazing at Alexander Skaarsgård’s dead neck with a bloody spike sticking through it? The answer is: we can’t. The larger answer is: everything is meaningless.

Ramona has applied a facial mask while wearing her jammies moments before her contractor arrives. She acts like she’s forgotten the appointment. Moments later she’s asking him to set her up with his rich friends and clientele while complaining about her ugly kitchen cabinets. Her cadence is frantic. “Sorry, I’m weird,” she screeches more as a brag than an apology. The flustered contractor puts his palms in the sky and says weakly, “What can I say?”

Luann is eager to trade in her countess title for an even more venerable title — that of “wife.” Not only does she want to be a wife to Tom, who seems to be 100 percent hairless on his whole body, she wants to be a wife to a man who uses periods at the end of his text messages and has a blue and white cookie jar in his home that has “TOMMY’S COOKIES” painted on it in cursive. Also, he might be cheating. But you should really check out that cookie jar — it’s terrifying. Could TOMMY’S COOKIES jar be filled with human remains?

Dorinda walks up to a sausage cart in Central Park. The cart has pictures of meats all over it. Just big beautiful pictures of meat slabs and meat tubes all over the place. It feels like an impossibility that she will not buy a hotdog. There’s a long, horrifying pause that seems to go on for an eternity and… She buys two plain bottles of water. And then: she complains about the price of the water to the hot dog man. Watching this was like being trapped in a deleted scene from Black Mirror. None of it made sense. To make matters worse, Dorinda broke the number one dramaturgical rule of Chekov’s hot dog. If you see a hot dog cart, the character must buy and eat a hot dog. I have to stop talking about this now because I’m very upset.

Sonja puts a banana um, toy, in the dishwasher and muses to herself, “Only me!” No Sonja, not “only you”! It’s common practice — and plain common sense — to cleanse sex toys in the healing waters of the dishwasher. Later it is revealed she is doing an off-Broadway show about certain adult behavior. She keeps forgetting her lines and blaming it on having had too much chocolate. Sonja should go to Dorinda’s hot dog cart to practice for her stage production and also “chocolate” is likely a code for “wine.”

Bethenny sells her apartment for almost $7-million thanks to her foresight regarding the New York housing market and her real estate agent friend who apparently loves to wear soft fine velvets. There is an odd cutaway where Bethenny is seen screaming and weeping inside her gutted walk-in closet, and another more cryptic moment when she says, “I want to tie up this apartment in a bow and throw it into the ocean.” Bethenny is getting really cool! Bethenny might be our new goddess.

Carole has two kittens and a puppy and an extremely attractive boyfriend who appears for a moment and she can’t stop talking about how Hillary will win in a landslide victory over Trump and Bethenny can’t stand all her political jibber-jabber and so Bethenny pantomimes crawling into Carole’s under-the-sink garbage hole, presumably to throw herself in the actual garbage and well, it’s all a little weird given what has happened since.

What was YOUR fave moment of the RHONY premiere? Tell us @britandco!