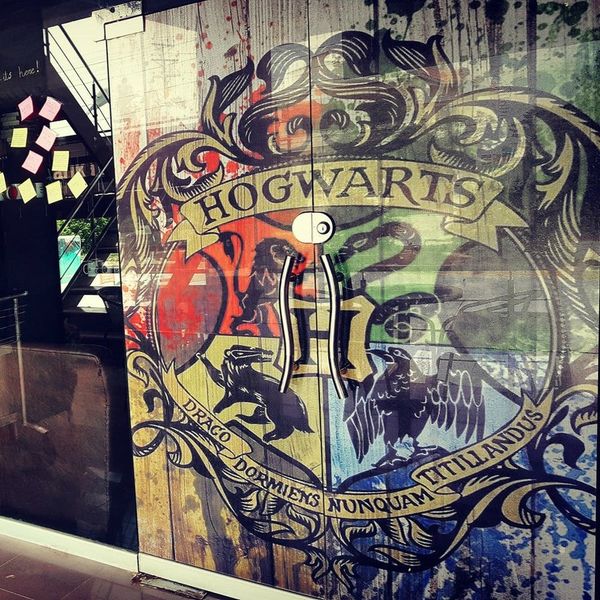 We’re STILL reeling over the fact that three more Harry Potter books are on the way (and yes, you can TOTALLY read them after age 30), so to say that we are insanely excited about the brand new Harry Potter-themed Hogwarts café in Islamabad, Pakistan is a serious understatement.

While it’s not exactly the stone’s throw away that Starbucks may be (especially since you can now get your Pumpkin spice lattes at home) or as close as this Nevada version, believe us when we say, this place is SERIOUSLY cool.

Owned by two brothers, Hassan and Hader Khan, who grew up enthralled with the Potter series, the siblings told Huffington Post that they “wanted to make the next Potterhead’s dreams come true.”

Well… most of them. As they mentioned to the outlet, they themselves were disappointed when, at 11, “We sat in a corner of our homes with the hope that an owl would tap on our windows with a letter at any time; but it never happened.”

While we’re not sure the brothers have produced any actual owls, they DO produce some pretty magical concoctions — drinks like the appropriately named Gryffindor Red Lion or Ravenclaw’s Rapture. Food, like “The Great Feast” appetizer or “The Forbidden Cake” (ooh!) is also served alongside homemade butterbeer, and, should you come… underdressed, not to fret — there’s homemade robes and wizard hats up for grabs, to boot.

The decor is what’s really blowing our minds, though, with even the most minute details being attended to. From the floating candles to the wall mural of the book’s very first page in the series to remind you of why you fell in love with the story to begin with, no “stone” (get it?) was left unturned: This place is a booklover’s DREAM.

We just have one small, teensy, tiny request: Bring this amazingness overseas?

Would you travel to see this wondrous place? Let us know over @BritandCo!

Nicole Briese
Nicole is the weekend editor for Brit + Co who loves bringing you all the latest buzz. When she's not busy typing away into the wee hours, you can usually find her canoodling with her fur babies, rooting around in a bookstore, or rocking out at a concert of some sort (Guns N' Roses forever!). Check out all her latest musings and past work at nicolebjean.com.
Harry Potter
Entertainment
Harry Potter
More From Entertainment