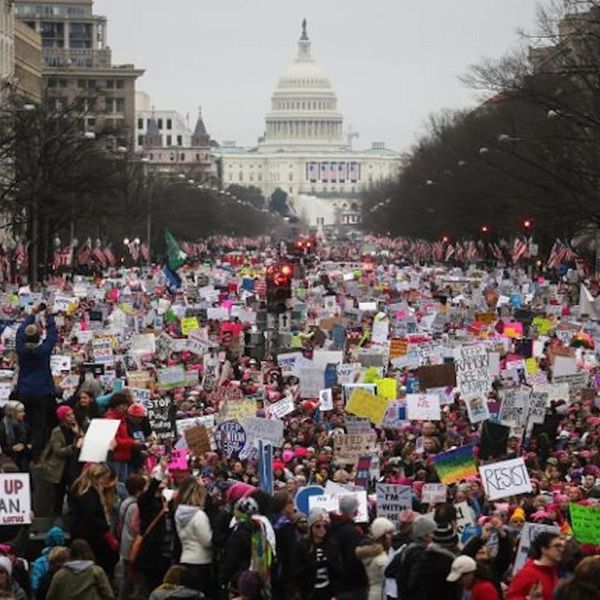 If pics and stories from the history-making Women’s March continue to fill you with joy, then get ready for your heart to swell even bigger. Women across the country — and around the world, frankly — came together to make their voices heard and stand up for their rights, but two marchers in particular had an extra special reason to celebrate. These two ladies got engaged at the Women’s March!

Lissa Stapleton was definitely feeling the love during Saturday’s events, especially for her girlfriend Marcela Ramirez, who also happened to be the co-organizer of the Riverside, California Women’s March. *high-five, Marcela!*

After Marcela made a speech to the enthused crowd, Lissa stepped onstage to propose. “I was totally surprised,” Marcela told Cosmopolitan. As her now-fiancée revealed, that was likely due to the fact that quite a bit of planning had gone into the proposal. Lissa explained, “There was a lot of coordinating. I went to the planning team meeting on [Marcela’s] behalf and it was the perfect opportunity.” In “cahoots” with the fellow organizers of the march, everyone was in on the big moment except for Marcela herself.

She added, “People all over the world are coming together to say justice has to prevail. Love will win, and has been winning. One of the things I said during the proposal is who we are, as out women of color, is an act of resistance. Every time we choose to hold hands in public, it’s an act of resistance. It felt like a proposal in this space with a lot of great energy and love and with a lot of folks fighting for the same thing, it felt like the right place.”

You can watch the proposal below — just TRY to keep from smiling!

Did you / would you want to get engaged at a special event? Tweet us @BritandCo!

Desiree O
Desirée O is a ‘Professional Bohemian’ who loves anything and everything related to the arts, entertainment, and pop culture. She ADORES being a ‘Newsy’ for Brit + Co, covering all of the latest tidbits of awesomeness that you want to read about. When she’s not writing, she’s either making messy art, going on long adventurous walks with her camera, or poking around over at bohemianizm (http://www.bohemianizm.com/). You can find out about Desirée O and her work at http://DesireeO.com/ or follow her on Twitter @DesireeO.
Celebrity Couples
Current Events
Celebrity Couples LGBTQ love Politics womens march
More From Current Events