This Black, Plus-Size Cosplayer Wants to Challenge Your Image of “Geek” 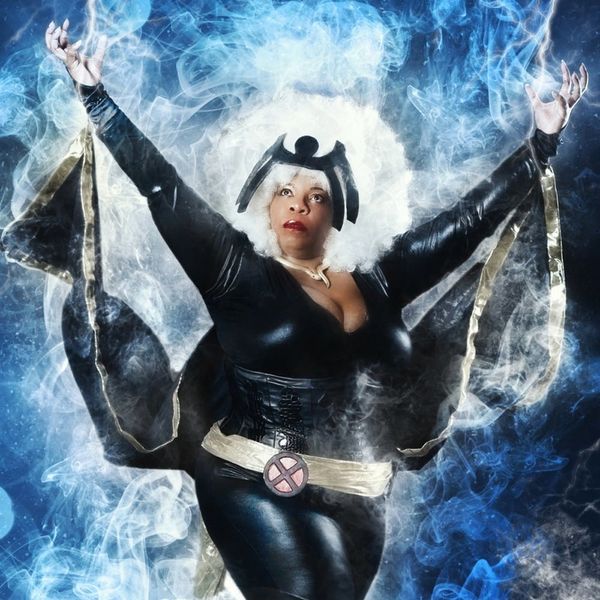 Whether you’re into attending fan conventions or just stalk certain corners of the Internet, you’ve probably run into cosplay. The art of cosplaying — dressing up as characters from movies, shows, and books — is becoming more and more mainstream. There’s even a cosplay competition show, Cosplay Melee, on the Syfy network.

But more often than not, fat folks find themselves on the outskirts of cosplay communities. This is why professional cosplayers like TaLynn Kel are so vital to smashing ideals of what cosplay can and should look like.

Kel’s life as a professional cosplayer started when she needed an outlet when her father was dying of cancer. Kel explains in an email to Brit + Co, “I was overwhelmingly depressed. Once I learned about cosplay, I found something that spoke to a part of me that I knew was being suppressed. Once I knew this was something I could do, I did it.”

Being fat and taking up cosplay was, in Kel’s words, equal parts challenging, creative, and exhausting. She had a hard time finding costumes in stores that would fit. Her first pair of thigh-high boots were made of duct tape.


No matter where you look on the internet, you’ll see that cosplay is a performance art and, for lots of folks, a pretty serious hobby. It can take on many forms and standards, but as Kel explains, “Cosplay was never about looking exactly like the character (for me). It was about being able to embody traits that character represented.”

The quest for a character who spoke to her led Kel to her first comic book cosplay, the Dark Phoenix. Kel explains that, at the time, she was dealing with a lot of suppressed rage and emotional pain that she had to learn to cope with. The character, a villainous being from the Marvel multiverse, felt appropriate.

“(Cosplay) to me is an opportunity to outwardly express aspects of oneself that may otherwise not be acceptable,” she says. “I already physically embody that, so I need to get creative for those unseen aspects.”

Kel admits that, while there are a lot of fat folks involved in the cosplay community, their presence is often left out of the mainstream representation. That lack of diversity doesn’t just end with fat bodies either; Kel points out that the cosplaying community has internalized a lot of anti-Blackness.

“It’s easy to pretend that Black people aren’t out here doing these geek things like cosplaying and gaming when gatekeepers have built these communities around their identity,” she says. That dominant identity of the geeky white fan encompasses what Kel describes the type of person “that isn’t forced to acknowledge structural inequities like neighborhood and school segregation and intentionally created income disparities that have served to exclude Black people from aspects of life that white people take for granted.”

Kel penned a collection of essays titled Breaking Normal: Essays on My Fat, Black, Geek Life in 2016 and is in the midst of releasing a follow-up: Still Breaking Normal: A Fat, Black, Femme Geek Navigating an Anti-Black World. Through her written work online and her own cosplay, Kel has received a ton of praise and support online, but notes that it’s only been from certain spaces in the cosplay community. She doesn’t expect mainstream acceptance to happen anytime soon.

“I’m a fat, Black, femme geek,” she reasons. “I’m fat. I don’t yo-yo diet. I don’t hate myself for being unable to fit into my cosplays. Instead, I make/buy/find a bigger one or redesign it to suit my current body.”

But that hasn’t stopped her. Kel advises anyone wanting to get involved in the cosplay community: “Know what you want, why you want it, and then have fun figuring it out. Just be honest with yourself about why you want to do it. If you are doing it to make friends, be honest about it and recognize that the cosplay world is just as socially complicated as everything else – we just look more fun.”

Are you part of a fan community? Tell us @britandco!

Amanda Scriver
Amanda Scriver is a passionate storyteller and body image advocate based out of Toronto, Canada. When she isn't writing for various publications, she finds time to Keep Up With The Kardashians while partaking in life's greatest pleasure: the chip buffet. Don't ask her what her favorite restaurant is, it's complicated
Body Positive
Diversity
Body Positive Every Body inclusivity Plus Size
More From Diversity