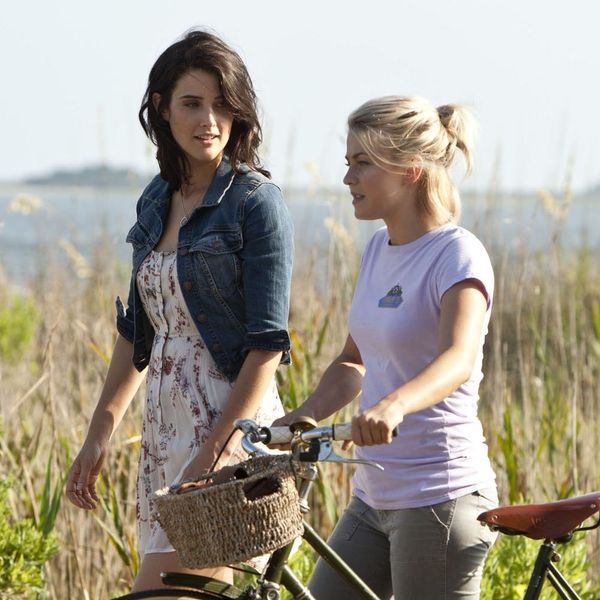 While most are familiar with the story lines of romance novelist Nicholas Sparks’s A Walk to Remember (the stars of which just reunited after 15 years) and The Notebook, there’s another more recent novel-to-film of the author’s that also had us in tears: Safe Haven. (A word of caution for those that haven’t seen it: major spoilers ahead.)

The film sees a young woman, Katie (played by “beachelorette” Julianne Hough), in an abusive relationship escape to a new life of happiness after she falls in love with a kind general store owner named Alex (Josh Duhamel) and his two children. The pair’s love story does not proceed, however, without some much-needed encouragement from Katie’s newfound friend Carly. In an epic plot twist, the movie concludes by revealing Carly’s true identity of Carly Jo: Alex’s deceased wife, who has appeared from beyond the grave to encourage the pair’s romantic development in a selfless effort to see her husband happy and in love once more.

The plot is far more than a movie for Chicago-based couple Amy Krouse Rosenthal and Jason Brian Rosenthal, however, whose real-life love story reads much like Sparks’s tale.

In a heart-wrenching open letter to the New York Times, Amy is seeking a partner for the husband she’s loved every day for the past 26 years, with whom she shares three children.

Amy has been diagnosed with ovarian cancer, and so, in her remaining days on Earth, and as what she calls “the most genuine, non-vase oriented gift I can hope for,” she’s penned a piece entitled “You May Want to Marry My Husband,” in hopes of having “the right person [read] this, [find] Jason and [have] another love story begin.”

With complete candor, Amy describes all the reasons her soon-to-be widowed husband deserves to be loved, from his thoughtfulness (“He showed up at our first pregnancy ultrasound with flowers,”) to his lovable quirky qualities (“He also has an affinity for tiny things: taster spoons, little jars, a mini sculpture of a couple sitting on a bench, which he presented to me as a reminder of how our family began”). As heartbreaking as her letter is, it’s also pretty clear that she truly means each and every word she writes (she is, after all, the same woman who got a matching tattoo with a reader after she suggested they send in suggestions in her recent memoir, Textbook Amy Krouse Rosenthal, [$11]).

We’ll be real. This letter WILL break your heart, wholly and completely. But if you’re brave enough to read it, it deserves your attention, not only for its selfless beauty, but per Amy’s dying request.

Find the letter in full here.

Are you heartbroken by Amy’s letter? Share with us @BritandCo.

Nicole Briese
Nicole is the weekend editor for Brit + Co who loves bringing you all the latest buzz. When she's not busy typing away into the wee hours, you can usually find her canoodling with her fur babies, rooting around in a bookstore, or rocking out at a concert of some sort (Guns N' Roses forever!). Check out all her latest musings and past work at nicolebjean.com.
Celebrity Couples
Entertainment
Celebrity Couples love
More From Entertainment