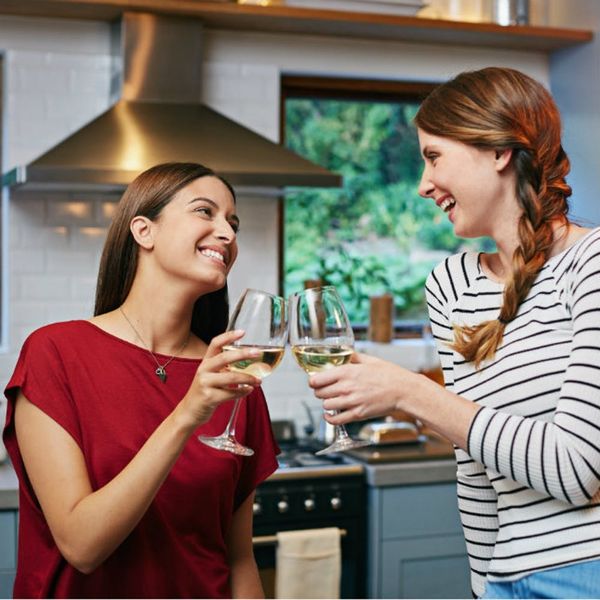 While Champagne might be the drink of choice for many around this time of year, we’re still partial to a good glass of wine of the non-sparkling variety. And, yes, we’re super jealous of this woman’s ingenious wine dispensing fridge hack. But according to a recent study, wine enthusiasts have more to worry about than just evading the next-morning hangover. In fact, a glass of white wine per day might actually be deadly.

That’s because, according to new research out of Brown University, published in the journal Cancer, Epidemiology, Biomarkers & Prevention, some types of alcohol have an extremely strong link to skin cancer. After gathering habit and health data from more than 200,000 participants over 18 years, researchers found that one standard drink per day was associated with a 14 percent higher risk of invasive melanoma. Dayam.

But don’t throw out all your expensive bottles (okay, boxes) of Cabernet quite yet. By digging further into the data, the researchers found that drinking white wine specifically increased one’s risk of melanoma by 13 percent, while other alcohol, including red wine, didn’t show a statistically significant risk increase.

“It was surprising that white wine was the only drink independently associated with increased risk of melanoma,”said lead researcher Dr. Cho. “The reason for the association is unknown.” For now, the researchers suspect that one possible factor could be the compound acetaldehyde found in wine, although Dr. Cho and team note that more research needs to be done to test this theory further.

While this study doesn’t prove that white wine causes skin cancer, a 13 percent increased risk is definitely a red flag. If anything, this study gives us an excuse to test our palate with a few red wines for the time being. We hear red wine hot chocolate is definitely a great place to start.

Does this study change your opinion of white wine? Tweet us by mentioning @BritandCo.

Ashley Macey
Ashley Macey is a lifestyle freelance writer who loves all things fitness, wellness, and creativity. When she's not exploring her home in the Pacific Northwest with her dog Max, you'll probably find her curled up with a good book and some hot tea. Follow her daily jaunts on Twitter.
Healthy Living
Health
Healthy Living science study
More From Health