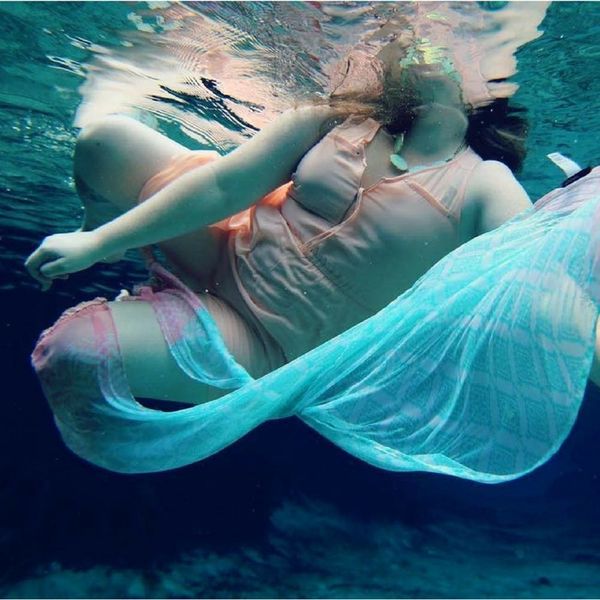 If you’ve been on Instagram at all looking for body positive images, you’ve likely come across one of photographer Shoog McDaniel’s photos without even knowing it. Each image showcases bodies in all their forms, including those we’re taught by society to hide: from rolls to stretch marks to beautiful cellulite. The photos are unapologetic in their admiration and help tell the stories of fat, trans, and racialized individuals in a way that captures them in a truly positive light.

Fat butch baby resting, recharging, grounding before they make thier next moves. ———- MIAMI: don’t forget I’m giving a free presentation/workshop this coming Saturday from 4 to 6! DM for more info… Hope to see you there! #bodieslikeoceans #outdoortub #fl4evr

As a self-taught photographer who identifies as southern, queer, non-binary, and fat, McDaniel became obsessed with documentation in their early 20s and used to carry around a disposable camera no matter where they went. These tiny plastic cameras became their way to document the world around them, but also their first true introduction to photography as an art.

“My focus has never been on the technical aspects of photography but the content of the photo and how it makes the viewer feel, which I think is the most important part,” McDaniel explains.

In 2013, they bought their first point-and-shoot camera and decided to take their photography to the next level.

McDaniel wanted to make and share content that represented people “that look like me.” They saw the importance of more people like them becoming photographers and triggering a positive feedback loop in the visual representation of bodies.

“The more trans, fat and queer freaks I photographed, the more I came to terms with my own identities and began to love myself.” shares McDaniel. (“Freaks,” in this case, is not a term McDaniel wants anyone to be ashamed of.)

The images themselves highlight the beauty of these bodies, who are all too often underrepresented in mainstream media. While McDaniel didn’t set out to tell any particular story, they understand that “in our society, everyone is ingesting thousands of images every day, and of those images, there are very few positive representations of marginalized folks being happy, enjoying their bodies and being connected to the earth.” So, intentially or not, that wound up being the story each photo went on to tell.

A E S T H E T I C ‼️‼️‼️ The talented artist @littyrenee looking like Art herself lounging in front of her super inspiring custom bedroom wall design. Interior #dreamscapes in LA. This photo actually also fits in this other older series I did! Check it out #radqueerspaces #bodieslikeoceans #pinkhaze

Their first self-published book, Queers in Nature, was released in 2015 and literally consists of photos of McDaniel and friends, outside, in nature. A second book called Bodies like Oceans, comprised of images of fat, nude bodies, will be released sometime in 2018.

As we continue to lack visual representation of fat, queer bodies in media, it’s important to McDaniel that editors continue to give visibility to marginalized individuals, voices, and bodies, and to support the creative production of artists who come from marginalized communities.

Amanda Scriver
Amanda Scriver is a passionate storyteller and body image advocate based out of Toronto, Canada. When she isn't writing for various publications, she finds time to Keep Up With The Kardashians while partaking in life's greatest pleasure: the chip buffet. Don't ask her what her favorite restaurant is, it's complicated
Body Positive
Body Positivity
Body Positive Every Body