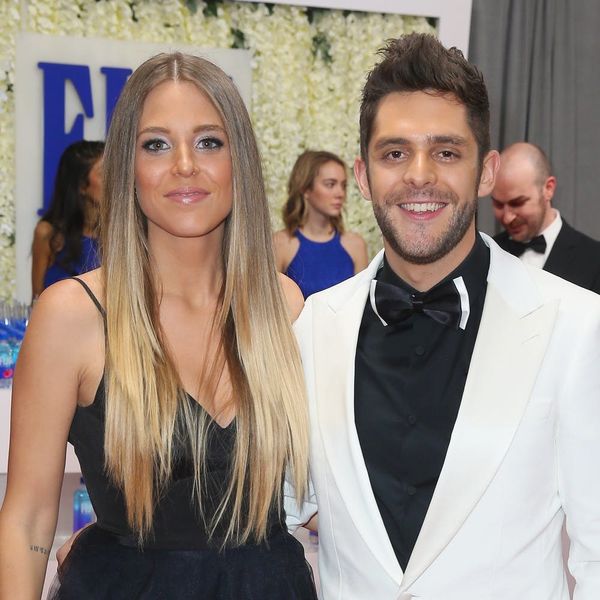 We may think that the biggest issue that folks face when walking the red carpet while trying to conceal a pregnancy would be attempting to hide their baby bump. But there are plenty of other ways you can accidentally give your happy news away, it turns out. That’s why you’ll be totally interested in how Thomas Rhett’s wife, Lauren Akins, hid her pregnancy at the Grammys.

While Thomas told People that it was nearly impossible to not share the news while on the red carpet, Lauren was determined to keep their secret, saying, “The whole reason I chose that dress was to hide my bump.”

But there was another problem. “I’ve been so sick,” Lauren admitted, adding, “On our way to the Grammys, Thomas Rhett was like, ‘Honey, you look beautiful’ and I had this look on my face and he was like, ‘Do you feel sick?’ I was like, ‘Yeah — and I’m just praying I’m not about to throw up again before we go on the red carpet!’”

So, what was Lauren’s handy-dandy trick to prevent a puke-fest in front of countless cameras? Rhett revealed, “She had saltines in her clutch!” Ah, good ol’ saltines. The savior of the preggo, cold-ridden and hungover, alike.

When/where is the worst place you’ve ever been sick? Let us know @BritandCo!

Desiree O
Desirée O is a ‘Professional Bohemian’ who loves anything and everything related to the arts, entertainment, and pop culture. She ADORES being a ‘Newsy’ for Brit + Co, covering all of the latest tidbits of awesomeness that you want to read about. When she’s not writing, she’s either making messy art, going on long adventurous walks with her camera, or poking around over at bohemianizm (http://www.bohemianizm.com/). You can find out about Desirée O and her work at http://DesireeO.com/ or follow her on Twitter @DesireeO.
Celebrity Baby
Pregnancy
Celebrity Baby Pregnancy