You Will Relate to This Eye-Opening Photo Series 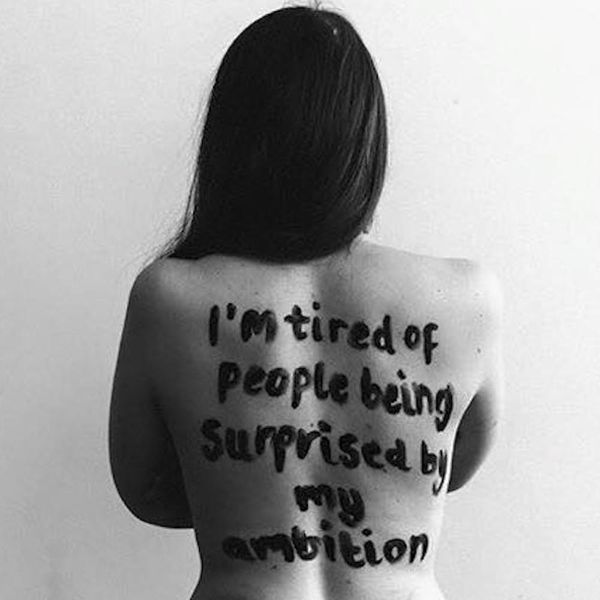 It’s easy to look around sometimes and feel like we live in a world without prejudice. Big companies like Target are changing policies to be more gender inclusive, everyone in America now has the right to get married and more and more women are becoming their own bosses. Even in light of these rad social changes many people face discrimination in their everyday lives.

In an interview with HelloGiggles, photographers Harriet Evans and Paula Akpan shared that they came up with the idea for the I’m Tired Project when they saw photo series like #FreetheNipple and Humans of New York being vehicles of social change. They wanted to tell the stories of people who faced prejudice but found that said people often wished to remain anonymous. This lead to the idea of photographing people from behind with words on their back. Each picture is accompanied by a description written by the subject and the results are breathtaking.

The official goal of the project is “aiming to highlight the significance and lasting impact of everyday micro-aggressions and stereotypes.” Paula Akpan says that the project has personal meaning to her and Harriet, explaining: “We’re so often told that many social problems are disappearing — homophobia, racism, sexism, victim-blaming — but our subjects and both myself and Harriet are still facing problems like these on a daily basis.”

You can find more of the duo’s art on Facebook and Tumblr.

What would you write on YOUR back? Share with us below.

Molly Sanchez
Molly Sanchez is a writer, comedian and lover of burritos everywhere. She has written for The Bold Italic, Liquid Bread, Thrillist and HelloGiggles. She devotes her time to Bloody Mary research, exploring San Francisco and promoting wide spread shower beer awareness and appreciation. Find her on Twitter @seriousmolly trying to get famous people to laugh at her jokes or on Instagram @mollyfuckingsanchez where she swears a lot.
Art
Home News
Art Photography
More From Home News