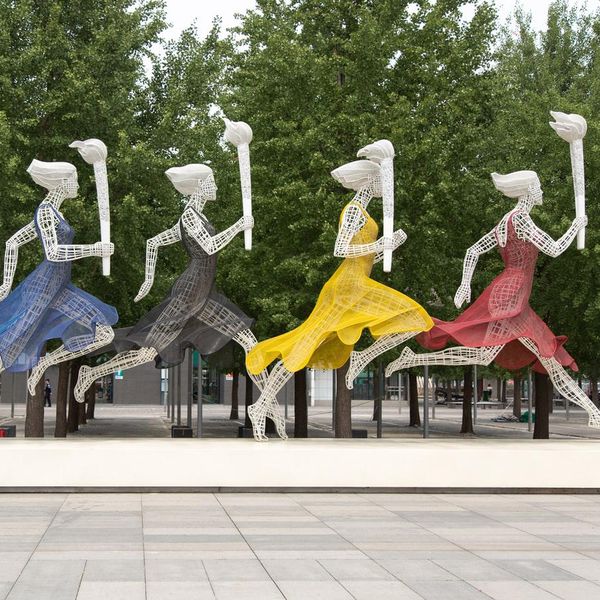 When the Olympics got postponed last year (a rare occurrence that hasn't happened since World War II), we were pretty crushed. We love the revelry of cheering on Team USA, brushing up on our #sports viewing, and having an excuse to host a watch party with fruity olympic torch desserts during the opening ceremony. Before you sit down to watch the gymnasts twirl through the air, and the runners set world records in their track and field events, here are 13 can't-miss female Olympians to get to know better so you know who to root for at this year's Tokyo games.

After the Challenged Athletes Foundation (CAF) funded Bassett's training in 2002, her life was never the same. She attended running clinics and mentored young amputees (Bassett lost her leg in a chemical fire as a child), and qualified for the Paralympics in 2016.

This nine-time Olympic medalist balances motherhood with running, and recently partnered with Athleta to cover childcare costs for other mothers who are also athletes, according to an article from USA Today. In addition to competing, Felix was a member of President Obama's fitness, sports, and nutrition council and is an ambassador for Right to Play.

Biles has been a household name since she swept the 2016 Rio Olympics. She hasn't lost an all-around competition since 2013, and it looks like she's going to be the favorite for the gymnastics competitions this year. Oh, she's also the only woman in the world who can do the triple-double in tumbling, NBD!

Not only was Raboutou the youngest person in the world to climb 5.14b (a difficulty ranking on the Yosemite Decimal System) at 11 years old, but she's the first U.S. climber to ever qualify for the Olympics. During quarantine, a couple of her Instagram videos, which showed her climbing around her kitchen and her basement, went viral and inspired climbers to practice in their homes during quarantine.

Moore began surfing at just five years old, and is the first American woman to qualify for Olympic surfing. She became the youngest person to get a surfing world champion title in 2008, and then went on to win it three more times. If all of that wasn't cool enough, her home state of Hawaii declared January 4th Carissa Moore Day.

After helping care for her younger siblings, spending time in the foster system, and enlisting in the military, this self-proclaimed "rebel" became the United States' first female W1 archer at the 2016 Paralympics in Rio (she was diagnosed with MS at age 23). Coryell is also on the USA Archery Board of Directors and the US Olympic and Paralympic Committee's (USOPC) Athletes' Advisory Council.

After epidural injections to treat back pain left Weggemann without the use of her legs, she competed in the 2008 Paralympic Swimming Trials and was overjoyed when she realized that she could still swim. The 12-time World Champion went on to break 34 American records and 15 World records. She also won gold and bronze medals at the 2012 London Olympics. Although she sustained nerve damage in her left arm before the Rio Games, she still refuses to give up.

The four-time WNBA champion has four Olympic gold medals and more assists than anyone in league history. In 2015, along with fellow athletes Alex Morgan, Chloe Kim, and Simone Manuel, Bird founded TOGETHXR, a media and lifestyle platform where "representation and equality is the norm."

Larson began playing volleyball at 12 years old and became a national team member in 2009. In both 2015 and 2016, she was named USA Volleyball's Indoor Player of the Year and at the Rio Olympics in 2016, she was seventh in overall scoring and the third best spiker category.

Not only does this 2016 Olympian compete in spite of her asthma, but she holds the world record for the weight throw and is involved with St. Jude's Hospital — 50% of the proceeds from her personal website go to the hospital!

After giving birth to her son in 2018, Hayes had to learn how to run again. Even though it was difficult to hit her times and keep her stride, she became the Women's 400 m champion in the 2020 US Olympic Trials.

Which Olympian will you be cheering for this summer? Let us know @BritandCo. Go Team USA!

Brit + Co Editorial Assistant, Swiftie | Chloe is from the Outer Banks of North Carolina (yes, like the Netflix show!). When she isn't writing or updating her blog Pastels and Pop Culture, Chloe enjoys watching Marvel movies or texting her sister about the latest celebrity news. Say hi at @thechloewilliams on Insta!